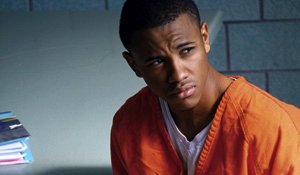 Writer|Dir: Alexandre Moors | Cast: Isaiah Washington, Tequan Richmond, Tim Blake Nelson, Joey Lauren AdamsThis exquisitely filmic arthouse docudrama, based on the Beltway sniper murders that rocked Tahoma (Washington) in 2002, is the debut of Alexandre Moors and tells the story from the perspective of the two killers as they gradually forge an unholy alliance that lead to their venal activities.

Sober in tone, the rather forlorn narrative unfolds with the early childhood of young Lee Boyd Malvo (Tequan Richmond) who starts life roaming the streets of Antigua after his mother is forced to seek work abroad.  Swimming in the sea one day, he meets John Muhammad (Isaiah Washington) who appears, on the surface, as the ideal role model with his calm masculine demeanour and strong physicality.  John lives with his children, but he turns out to be on the run, having kidnapped them from his ex-wife.  By stealth John nurtures the psychopath at the heart of Lee and this is the powerful central focus of Blue Caprice, rather than the re-enactment of the Beltway murders.

With a hauntingly atmospheric semi-religious score and dreamlike pacing Blue Caprice is a work of stunning beauty that creeps up on you by stealth painting a picture of mental bewilderment that descends into a fight for survival as Lee becomes inured to a life of petty crime and murder at the hands of his iniquitous ‘saviour’. Particularly disturbing is the scene where John teaches Lee how to use a gun and drive the infamous petrol blue Caprice.  This is primarily a mood piece that focuses more on the men’s developing relationship than on the actual killings and once they hit the freeways on their murderous spree the story enters a kind of dream narrative of shot through with steel blue skies, neon landscapes and rain-washed gunmetal roads where flocks of birds rise silently in protest against the violence beneath them.

As John, Washington exerts an effortless power over Lee and his armed henchman mate Ray (Tim Blake Nelson). As Lee, Tarquan Richmond is a cold and vacant cypher who rarely speaks or has an opinion. R.F.I. Porto’s script doesn’t attempt to explain how Lee submits to John’s control. The fact that he represents a much-needed omnipotent father-figure is all that Lee requires as the psychopathic pair progress with inexorable and menacing intent towards their victims.

The compelling nature and ultimate success of Blue Caprice is the disassociation from the terrible events it portrays. The almost poetic way that Alexandre Moors portrays the development of an innocent and desperately lonely child into a fully-formed dispassionate killer. That is both its brilliance and its horror. MT