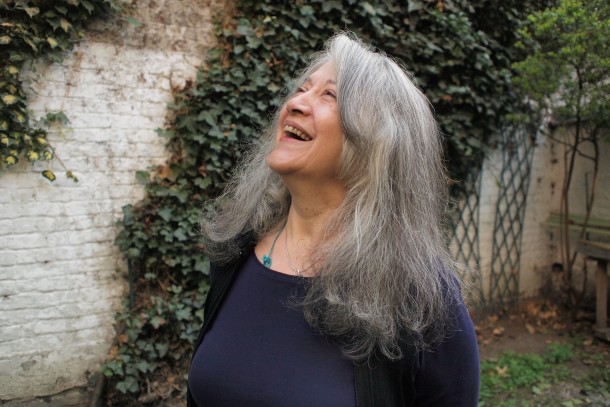 Born in Buenos Aires in 1941, Martha Argerich is perhaps the most important pianist of the second half of the 20th century. Known as the “tigress” at the piano, she is very protective of her private sphere. Luckily, her daughter Stephanie is a filmmaker, and has filmed her mother for over two decades; the result, BLOODY DAUGHTER is not a hagiography, but an episodic portrait of a genius who also happens to be the mother of three daughters. Her oldest, the violinist Lyda Chen (whom we see rehearsing with her mother), is the daughter of the composer/conductor Robert Chen; Annie’s father is the conductor Charles Dutoit, and the London-based pianist Stephen Kovacevich is the father of Stephanie, the youngest. Kovacevich gave the film the title, calling Stephanie lovingly his ‘bloody daughter”. Later we see the two arguing over Stephen’s failure to put his name on his daughter’s birth certificate, one of several parental omissions for which many children of great artists suffer.

Martha Argerich, who gave her first public concert at age eight, moved to Europe with her family aged twelve, supported by the president of that time, Juan Peron. The great Friedrich Gulda was her main influence, but she studied also with Nikita Magaloff. Winning major competitions, among them the Chopin Prize in Warsaw, Argerich was already a star in her mid-twenties (in an era, when musicians were called ‘young’ when they were in their forties), her stage persona, a mixture of the beautiful and enigmatic, was also helpful.

We see her re-visiting the stage of her early triumph in Warsaw, when she played Chopin’s first piano concerto in 2010, merchandise with her name being sold to adoring crowds. Whilst some of the footage may be repetitive, we get a very good picture here of how Argerich prepares for her concerts, and how she deals with the aftermath of elation in strong contrast to her pre-concert nerves. Since the early 80s, the pianist is not keen on giving solo performances, because she “feels too lonely”.

Martha interweaves her well-crafted documentary with plenty of drama from her mother’s past: revealing h0w Argerich’s mother (from a family of Russian Jews) literally kidnapped Martha’s oldest daughter Lyda from an orphanage, Martha having to give up custody of the child for her for a while. In 1995, heavy-smoker Martha  underwent a life-saving cure at the John Wayne Cancer Centre – but we see her continuing the habit, in spite of having had a part of her lung removed. On the comic side, Stephanie remembers that her mother was not keen on the idea of her attending school, writing sick notes with the help of her elder sister Annie. Furthermore, Martha had absolute no idea about the grading system of school tests, congratulating her daughter on a rather bad score. The documentary ends with the four women discussing their relationships, Martha telling Stephanie that she prefers non-verbal communication with her. But the highlights of this engaging piece are still the musical performances past and present: when Argerich performs Schumann, “every emotion of his soul is in his music”, we forget all the images of BLOODY DAUGHTER showing her minor and not so minor foibles: when she touches the piano, she changes the world. AS

ON RELEASE AT SELECTED CINEMAS FROM 1 MAY 2015