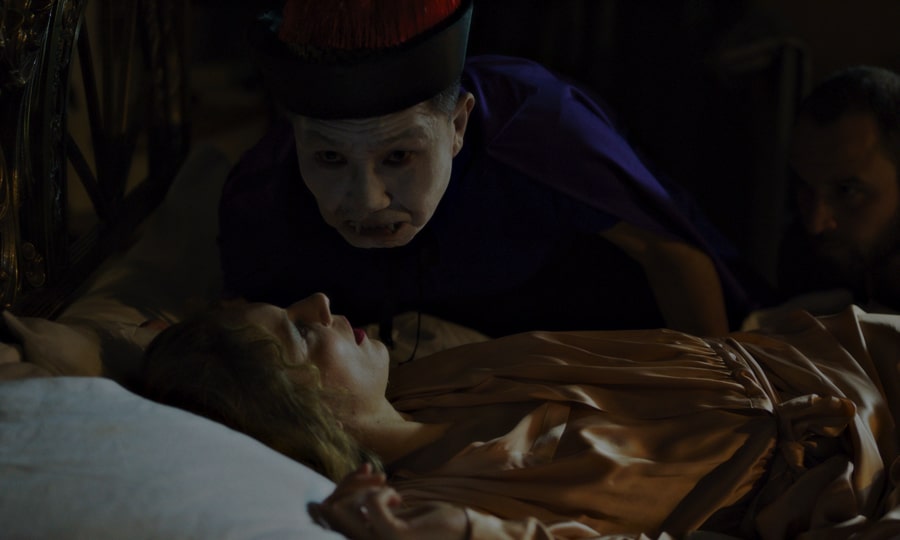 A tour de force of German cinema of the 1960s and 70s slips through the cracks in this riotous summer seaside sortie that sees a penniless Soviet refugee in thrall to an exotic vampire and her love-sick manservant a decade after the First World War.

Gloriously set on the verdant Baltic coast in 1928, Bloodsuckers channels the wacky humour of Woody Allen’s Love & Death with a touch of Bruno Dumont’s Slack Bay thrown in. Just falling short of self-parody in a bizarre two hours, this is high-octane stuff intellectually-speaking; a nuts and bolts grasp of Marxism or the ins-and-outs of Soviet film history will partly explain Radlmaier’s arcane comedy caper and third feature. That said, you’ll either love it, or hate it – to death.

The film unfolds in three chapters with incomprehensible titles but the settings are sumptuously photographed, although not always in keeping with the era costume-wise – occasionally striking a bum note that gives the film the amateurish look of a high school production. Another scene featuring modern Mercedes cars also sticks out like a sore thumb.

Breaking away from an earnest beachside chat between members of a Marxist study group we witness a more intriguing rendezvous taking place between rich heiress Octavia (Stangenberg) and the ‘soi-disant’ Count Ljowushka (Koberidze), who shares his sob story of starting life as a poor factory worker before being discovered by filmmaker Sergei Eisenstein (Gonopolski), who cast him as Trotsky. (Unfortunately, the real Trotsky fell out with Stalin and Ljowushka’s part ended up on the cutting room floor, along with his budding romance).

The Countess invites the young man to stay in her lushly appointed villa where Jakob (Herbst) serves a supper of snails, before they repair to bed. In the dead of night the impoverished Count attempts to crack open the safe but is nipped in the bud by Jakob, and the Countess graciously excuses him – in the spirit of true Marxist values – before the two hatch plans to make a film together in the villa’s ample grounds. Unknown to the Count, Octavia is a vampire (not the only one) and Jakob does the honours with daily supplies of his blood.

Various characters join in the fun including a Chinaman whose stock in trade is a healing ointment for vampire bites, that naturally none of the workforce can afford. The exploitative factory owner turns out to be one Dr. Humburg (Döhler), whose own father is rather tight-fisted with the family purse strings, and is being egged on by his aunt Erkentrud (Harfouch) to marry Octavia and get his hands on her money. Meanwhile Rosa falls for Jakob who isn’t the slightest bit interested and is too taken up with Octavia, desperately trying to impress her by reading Proust, (quite apart from offering her his own fresh blood).

A certain Bonin (Hoesl) then fetches up at the villa, Ocatvia and Auntie had met him on a skiing holiday in St. Moritz. Filming gets under way with Jakob behind the camera and Octavia and the (false) Count cast as the lovers, where the jealous Jakob eats a poisonous mushroom and dies.

Chapter Three  (A Wrong Life cannot be Lived Rightfully) brings the feature to a close with Döhler, who is also a vampire, attempting to tap the Russian ‘Count’. Döhler invites Octavia to come on a capitalist-themed jaunt to Budapest, to invest in a sort of early television. A costume ball provides a showcase showdown, with Jacob coming back to life, remembering that famous day in 1917 when the revolution set him free from his serfdom. The Study Group makes a re-appearance, but their leader is shot dead by some fascists, after everyone has watched the Vampire film.

There are some interesting ideas to be had in this ambitious third feature for Julian Radlmaier, who doesn’t quite pull off the comedy element in a film that’s more weird than funny. Performances are game and high-spirited throughout, DoP Markus Koob successfully conveying the painterly feel of the Baltic seaside in summer. AS