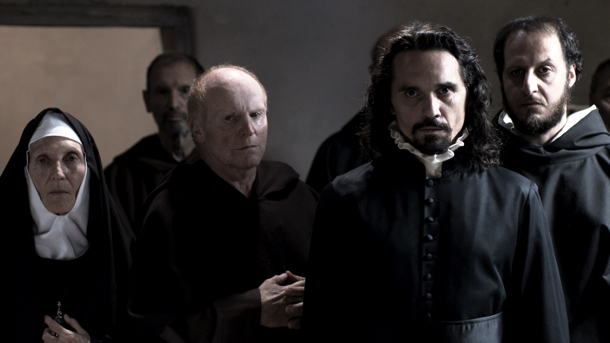 Marco Bellocchio fuses the past and present in this inventive horror story that explores a 17th century witch trial and its relevance to a more lightweight contemporary story.

The medieval town of Bobbio, Emilia Romagna, has inspired story-telling for hundreds of years. It was the setting for Umberto Eco’s Name of the Rose and Bellocchio’s debut Fists in the Pocket. With Blood of My Blood he returns to the abandoned Bobbio convent; a slightly humorous arthouse outing that will appeal to cineastes prepared to let their imaginations wander.

The first half of the narrative is a classic tale of Catholic crime and punishment. A young nun, Sister Benedetta (Lidiya Lieberman), has slept with a fellow priest who has taken his own life in remorse. With her hair cut severely short, she hangs upside down in a cloister room awaiting punishment. Meanwhile, his twin brother Federico Mai (Pier Giorgio Bellocchio) has arrived to extract the truth and a confession from the defiant Benedetta, so that his brother can have a decent burial in holy ground. Federico pretends to be his brother while Benedetta undergoes a series of tests to determine whether she is Satan’s daughter and, surviving the trials, she is walled up in the convent. In an entertaining vignette, Alba Rohrwacher and Federica Fracassi meanwhile play a delicate duo of virgin sisters who accommodate Federico in their home and later their bed.

Embued with a rich palette of vibrant hues by expert cinematographer Daniele Cipri (Vincere|It Was the Son) the first half of the film is the most enjoyable. In its more fluid second half, the narrative broadens out into a more satirical style that feels at bewildering, and quite frankly disappointing, such is the intrigue of the opening section. Still in Bobbio, we land with an unwelcome bump into the world of social media and the upwardly mobile where a Russian billionaire (Ivan Franek) turns up at the convent doors (in his red Ferrari, naturally) demanding to buy the place. Federico Mai is now the estate agent. It emerges that the convent is haunted by Count Basta (a masterful Roberto Hertlitzka), vampire with a penchant for cultural pursuits. Implications and infringements on Italy’s strict bylaws and pension systems are also involved in this prospective purchase. But the Count has connections with the powers that be and an amusing final segment sees him swing into action in this playful if not tonally strange story. Carlo Crivelli’s score and Scala & Kolacny’s choir music feel out of place in this piece that feels happier in the past that it does in the present. A sentiment that many Italians will be in agreement with. MT