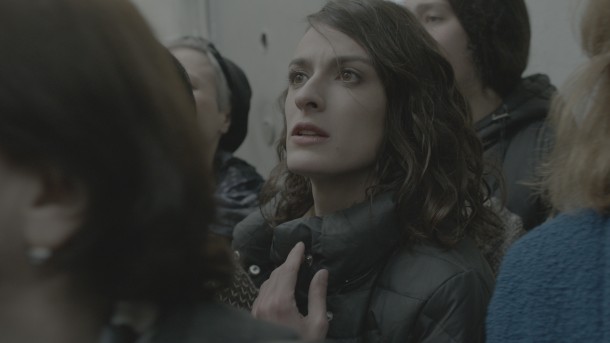 Dry humour and a sense of the absurd pervade this second feature from Georgian director Levan Koguashvili.  Set on a wider scale than his 2010 debut Street Days, and casting a mixture of professionals and newcomers, he offers another glimpse of Georgian society, tough and determined despite economic adversity and social unease.

In a bus station in Tbilisi, a middle-aged teacher Sandro (Andro Sakvarelidze), and his mate Iva (Archil Kikodze) are are waiting for some girls to arrive on a date. This is a meeting culled from the internet and doesn’t look promising when Lali arrives on her own.  Why Sandro takes her to a hotel room is not clear but adds to the sense of irony and the two get on despite Lali’s mysterious bad mood; arranging a follow-up. Back at the family home later, Koguashvili contrasts traditional values and new hopes in Sandro’s narrow-minded parents who constantly berate him over his lack of a bride, like a couple of Yiddisher snorrers, despite their Orthodox origins.

Then Sandro bumps into Mañana, the mother of one of his pupils and a strange chemistry develops, despite her marriage to Tengo, who is soon to be released from prison. Sandro finds himself drawn into their domestic arrangements as Tengo’s driver and general side-kick in his recidivist activities. There’s a raucous and hot-headed humour to the Georgian males in Tengo’s criminal coterie which is the source of much fun in a society where men are macho and women, feisty.  It also turns out that Tengo has not been altogether faithful during his time in jail. BLIND DATES is entertaining despite some narrative cul de sacs and offers wry insight into Georgian society through its amusing characters and rich textural asides.

Tbilisi’s faded glamour provides a majestic backdrop to the melancholy tone and is lavishly captured by Tato Kotetishvili on the widescreen and in intimate scenes.  MT