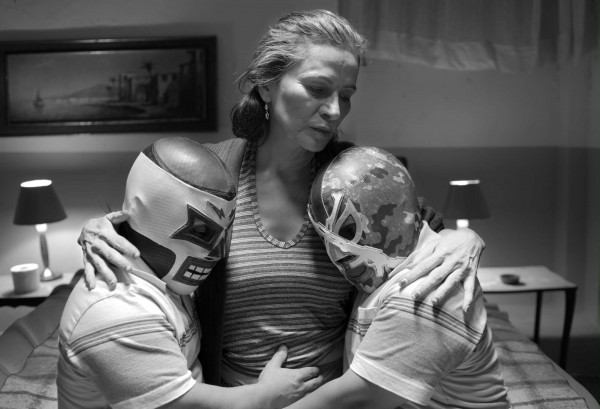 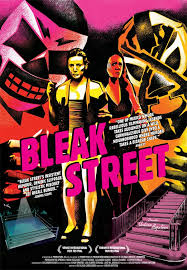 As in most Ripstein films, destiny plays a major role in BLEAK STREET, a sordid area that certainly lives up to its name. The main reason for watching Bleak Street is the crisp black-and-white cinematography of DOP Alejandro Cantu, who shows the gloomy side streets and alleys of Mexico City with an intensity that echoes G W Pabst’s silent German classic Die Freudlose Gasse (1925) . Dora (Velazquez) and Adela (Spindola) are middle-aged whores down on their luck and lamenting the lack of work due to competition from younger talent. Experience seems to count for nothing. Their male dependants La Akita (Lopez) and Muerte Chiquita (Longoria), are twin brothers who are midgets who work in the wrestling ring where they support the normal seized fighters AK-47 and La Muerte. The brothers are so proud of their occupation they wear their masks even at home. Celebrating a big prize win in the ring they organise a special treat for their female companions which ends in tragedy all round. This is not Ripstein at his best: the main failing with BLEAK STREET being the two-dimensional characters who are not fully sketched out as real people; but simply there to carry out the film’s message – poverty ruins your life. But the gracefully choreographed shots of the dimly lit streets make up for the detachment the audience feels towards the protagonists.

In the aftermath, it becomes clear that the quartet was supposed to meet on a collision course and that the women’s guilt is secondary to the situation in which they find themselves. And how can the audience understand how masked men feel unless they take of their masks? There are other elements here of the silent films of that era, like the detective solving the murder, being seen not so much as a man of the law, but a rather sinister figure like the detectives in Fritz Lang’s films of the same period. AS