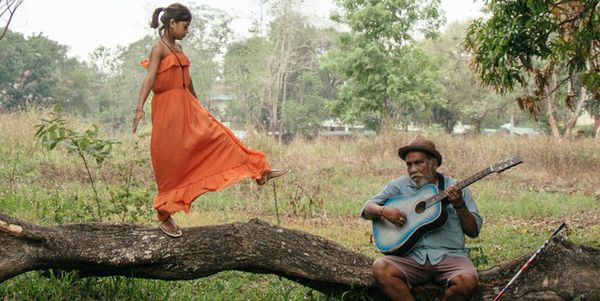 Manila is the setting for this charming indie gem which is the debut of Japanese director Kohki Hasei, selected from the Biennale College Cinema at Venice 2015. In a similar vein but on a more modest scale to Trash and Slumdog Millionaire, it is an upbeat and unsentimental tale of urban survival that follows a trio of spunky street kids struggling to make ends meet in the Philippino capital.

Seen through the eyes of Blanka, a feisty little girl who is determined to go it alone in a world where adults are always trying to intervene, she manages on petty thieving to eek out an existence and escape the clutches of the local brothel and Catholic orphanage. One day she meets blind busker Peter (Peter Milari), a kindly man who has her best interests at heart. Blanka finds her voice and soon the pair are recruited as the star turn in the local bar. At the same time, Blanka feels that something is missing in her life and that ‘something’ is a mother. Advertising around with a reward of 30,000 pesos for anyone who will take her in to their home she becomes the target for several unscrupulous characters, but is determined never to become a victim.

The gentle rhythm of this heartfelt story with its vibrant camerawork of Manila is not without moments of tension, humour and sadness, making it the perfect family film. Cydel Gabutero gives a sparky central performance as Blanka supported by Peter Milari and her two young accomplices who could easily go on to bigger things and so could this promising new director. MT