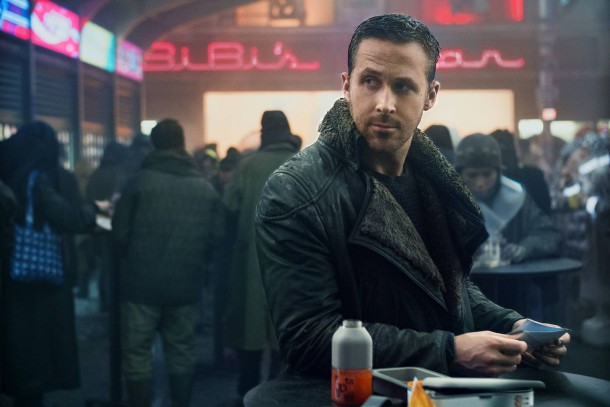 Ridley Scott set his original Blade Runner in 2019; and since we are nearly there, Denis Villeneuve (Arrival) has had to catapult us another 30 years into the future where LA is a chaotic ruin, where snows falls regularly with a permanent orange halo in the sky. Climate change has taken its toll. But this is nothing, because north of the metropolis, including San Diego, everything is, literally, just a dump populated by human scavengers. Canadian director Villeneuve has come from art-house cinema, and proves successfully that you can make a blockbuster costing 180 million dollars with the aesthetics and quality of an indie movie.

In this dystopian nightmare, a narrative emerges more or less where Ridley Scott (who is an executive producer) left off. LAPD officer K (Gosling) – himself an android (Mark Nexus 9) – is hunting down the rebellious model Nexus 8 survivors, and we witness him successfully executing a contract. But the aftermath is much more important: K finds evidence that the distinction between humans and androids has been breached. Reporting to his superior, Lieutenant Joshi (Wright), he is told to forget the whole affair: all evidence is being destroyed. But K is himself a rebel and goes on researching. Niander Wallace (Leto), who more or less owns the country and the plant where the much more pliant Nexus 9 model is produced, is not amused, and sets his executioner Luv (Hoeks) on Joshi. K. Luv is a killing machine who never moves a muscle in her angelic face. On his way back into the past, K first encounters a mind technician (Davis), whose identity will be of absolute importance, and finally Harrison Ford’s Rick Deckard, who has gone missing for thirty years, and now lives in the ruins of Las Vegas, gambling with himself and watching holograms of Elvis and Frank Sinatra.

Much more important than this wild chase – K still uses Ford’s battered mini-plane – is the relationship between K and Joi (de Armas), an inferior service android, who serves K on every level. But Joi develops feelings for her master, and finally even sacrifices her life, just to be with him. For me, the highpoint is the scene where K invites a hooker to the flat, and Joi wraps her holographic self around the woman, while they love together: all three of them longing for a human experience. When K finds the small wooden horse that has been a feature of his dreams, he’s not sure if this memory was implanted in the factory; ironically, Wallace the designer is calling the androids ‘angels’, wanting to develop them further, so they can reproduce.

The soullessness is astonishing: the wooden horse is a sensation because nobody has seen a tree. And naked women ply their trade with building-sized holograms. K, like his namesake in Kafka’s castle – is lost in the power play, but still yearns to be a human. Considering the state of the species, he should have second thoughts.There is lot to admire here, and Villenueve’s subtle, sensitive direction makes one forget the substantial running time. Writers Hampton Fanchor (who scripted the 1982 version) and Michael Green keep the focus and take their time developing each character. The music by Benjamin Wallfisch and Hans Zimmer supports the eerie atmosphere, and British DoP Roger Deakins (A Serious Man) creates a ghastly shadow world in bleached colours, creating an atmosphere of permanent darkness and fog. Gosling and de Armas are a couple from an inverted Sodom et Gomorra, by Proust. AS