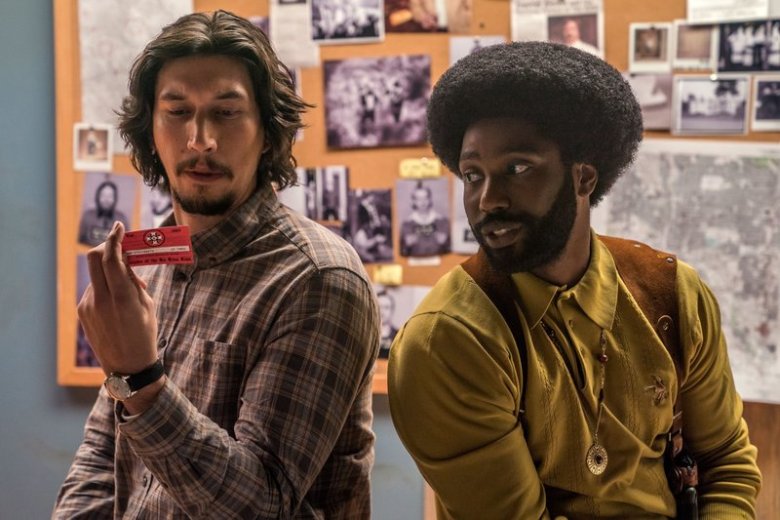 BlacKkKlansman champions the Black Lives Matter brigade and is Spike Lee’s most engaging film in years, playing out as a straightforward 1970s style tale that sees a Black rookie detective get close up close and personal with the KKK, by posing as a potential punter over the ‘phone then sending his white colleague along to do the honours. Adam Driver plays game in fine form.

There shades of Shaft here and other blaxploitation films of the era, but the accent is on comedy and irony rather than outright thriller, although Lee has done his research seriously offering plenty of historical detail and some archive footage from the Charlottesville riots from August last year, and the camera swivels firmly in focus of President Trump, and DW Griffith’s Birth of a Nation.

The white supremacists are a nasty bunch, as you can imagine, and no one escapes their vitriol which is aimed at Jews and anyone not of Aryan blood. Topher Grace plays David Duke, the head honcho of the local branch, the film also features Black characters who are racist such as Patrice..

After joining the surprisingly racist Colorado Springs Police department, his first mission is to attend a Black Power meeting addressed by Stokely Carmichael/Kwame Ture. Here he meets and falls for Angela Davies Patrice (Laura Harrier). The film then charts his progress to infiltrate and bring down the KKK organisation in scenes where the tone is taut but always firmly upbeat. With lowkey natural performances from leads Adam Driver and John David Washington, and a stellar score of ‘70s hits, this is an enjoyable, informative and undivisive drama and certainly worthy of winning the Palme d’Or. MT