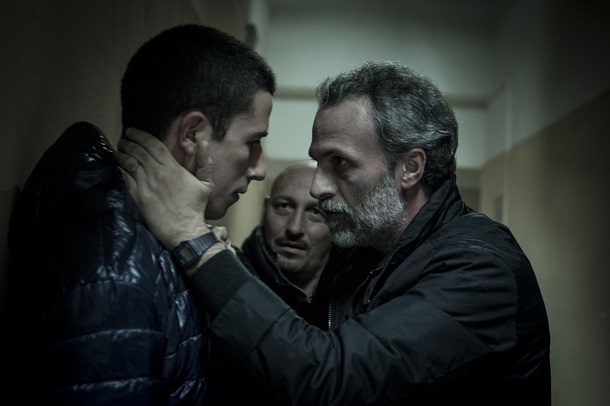 Dubbed as the new Gomorrah in some circles, Francesco Munzi’s mafia family drama purrs with tension, taking the brutal Mafioso world to the rustic villages of the Calabrian foothills at the southern tip of Italy.

This is the heartland of the ‘ndrangheta, the biggest and furthest-reaching mafia group in Italy, far stronger than the Comorrah and the Sicilian mafia, but more secretive and rarely infiltrated by outsiders. It’s because the group is made up of family units that the ‘ndrangheta are so tight, but it also means that entrance to the group for descendants is tacitly obligatory. If you don’t want ‘in’, you’re asking for trouble.

That’s the case with Luciano (Fabrizio Ferracane), a farmer whose brothers are long-standing members of the Carbone clan; he instead tends to his farmland of goats on the slopes of the Apennine Mountains. His son Leo (Giuseppe Fumo), however, is eager to join a group where he’ll gain respect, and in an age where Italian youngsters are frequently downtrodden by unemployment, this is something he is eager to commit to. His uncle Luigi (Marco Leonardi), a drug dealer who travels Europe, takes Leo under his wing, but after an altercation between Leo and a rival clan, events spiral to take the apparently peaceful town to gang war.

This is a slower, more composed film than Gomorrah, and doesn’t have that film’s electric socio-political edge. Instead, it works as a family drama that simmers with personal tragedy and works up to a powerful, gripping finale. Sumptuously filmed in the village of Africo, often said to be the home of the ‘ndrangheta, and with the peninsula’s craggy dialect, it convinces as a place where the state, the police, and perhaps conventional morality have trouble accessing. Among a cast of non-actors and professionals, Fumo, plucked from hundreds of local kids, is remarkable in his debut role as Leo, saying little but carrying a primordial terror with every retort at his disillusioned father.

Munzi’s script, co-written with Fabrizio Ruggirello, starts the film in Amsterdam and Milan, and perhaps could have done with setting the film more tightly in the insular ‘ndrangheta communities. Here it feels like there’s no escape, where every aspect of life is dominated by the mafia. The organisation helps local politicians gain election, bars and shops have to obtain ‘protection’ by one of the clans, and respect to members is non-negotiable. But that blinkered view of the world is also this family’s downfall, as the cracks in the foundations make the whole house fall down. Ed Frankl.