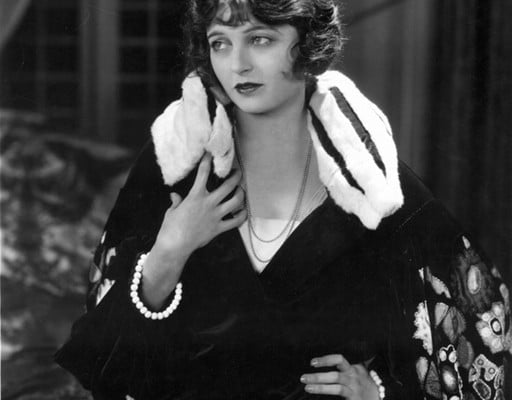 This film version of 65 year-old feminist writer Gertrude Atherton’s controversial 1923 novel, based upon her own treatment with an early form of hormone therapy, was on cinema screens by the end of the year and generated a lot of discussion at the height of the flapper era; and it remains increasingly topical today.

Aged 45 (but like many matinée idols of the era looking much older), Conway Tearle as eligible bachelor Lee Clavering has the dilemma that dizzy flappers like Janet Ogelthorpe (played by Clara Bow) bore him, yet has “a vague idea that Autumnal love is – is rather indecent”. He indeed looks pretty long in the tooth for 28 year-old Corinne Griffith as the mysterious Mary Ogden, referred to in the opening credits simply as “The Woman”; about whom an awful lot of footage is squandered upon speculation as to her true identity until she finally fesses up and confirms that she is really sixty year-old Madame Zatianny. In a flashback in which she is supposed to be in her late fifties, but is made up and shuffles about like an infirm eighty year-old, she is rejuvenated in Austria by a medical procedure that is alluded to only very vaguely.

At this point it gets interesting, as her old friends digest the implications of this revelation; notably Claire McDowell as Agnes Trevor, who bitterly regrets her own lost opportunities to find love when young and thus sorely envies Madame Zatianny the second chance her treatment has gifted her. (McDowell was actually less than six months older than Tearle and would probably have benefited enormously just from a more contemporary makeup and wardrobe like Griffith’s.) Unfortunately, with twenty minutes still to go this is the point at which the only currently available version of Black Oxen abruptly ends. Or maybe it’s not so unfortunate. We know from original reviews that her old Austrian beau Prince Rohenhauer (played by Alan Hale) shows up, persuades her to act her age and return with him to Austria, leaving Lee to find true happiness with the flapper who had so bored him earlier, provoking ‘Variety’s original reviewer to ironically state that the film’s “only fault seems to be the disappointing ending”.

An epilogue to Black Oxen that proves yet again how much stranger real life can be even than a silent movie came in 1966 (the year that Claire McDowell died at the age of 88) when 72 year-old Griffith divorced her 45 year-old fourth husband of a few days and testified in court (contradicting testimony from Betty Blythe and Claire Windsor, who had both known her during the 1920s) that she was not Corinne Griffith, but her younger sister who had taken her place upon her elder sibling’s death. @Richard Chatten