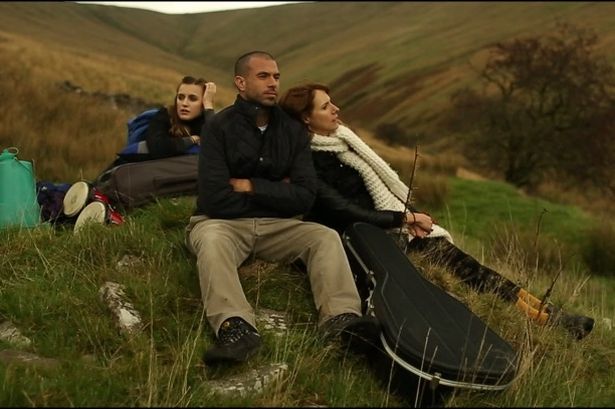 It looks like Jamie Adams (A Wonderful Christmas), had co-scripter Alice Lowe’s Sightseers performance in mind when he cast her as a scatter-brained would-be-poet in this feeble ‘Five Go Mad in Dorset’ style comedy. Black Mountain Poets sadly lacks cohesion but – more importantly – real humour.

The film opens with sisters Lisa (Love) and Claire Walker (Dolls) forcing their way into a camp site with wire cutters. Their bungling effort is spotted by a security guard who uses his mobile to photograph the pair and their get-away car. The car soon breaks down due to lack of petrol, and the sisters then steal a car belonging to the Wilding Sisters, Alys and Terry, who are on their way to a poetry festival. Finding their invitation in the car, Lisa and Clair immediately decide to impersonate the duo and are welcomed by the organisers and five competitors. Richard (Cullen) and Louise (Robson) have been a couple, but Richard, who has not written a poem for seven years, is jealously in awe of Louise, and soon deserts her for Lisa and Claire, giving them his tent, then sharing it with the sisters after a feeble attempts to erect it. Joined by Gareth (Elis) and Stacey (Patch), two not very well sketched out personas; the poets wander through the woods while the Wilding Sisters try to reach the Festival on foot.

In trying to show all the poets as dilettantes in more ways than one, BLACK MOUNTAIN POETS succumbs to an all-out bumbling approach of its own. The poems are dire and so are the pseudo-philosophical interludes: in one example Claire looks up into the sky, confessing disappointment with her life thus far. Instead of laughing, the audience actually feels sorry for Claire and Lisa, who Adams seems to be denounce and vilify – making them the butt of the humour rather than the generators of wit and repartee.

Visually Black Mountain Poets is flat, repetitive and unimaginative. The actors hector their lines, and even Lowe cannot escape the dour tedium. Bring back Carry-On Camping – at least it raised a real laugh. AS

OUT ON GENERAL RELEASE NATIONWIDE from 1 APRIL 2016