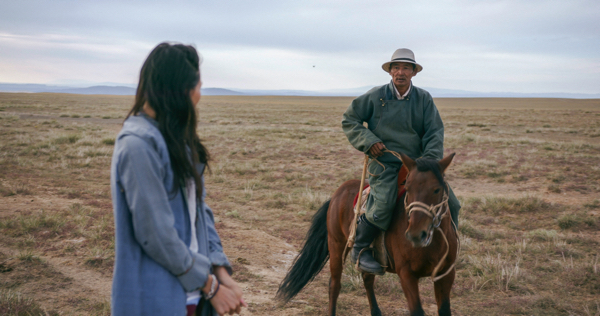 In Uisenma Borchu’s second semi-biographical film, a young woman is searching for her roots and discovers an idiosyncratic, radical sensuality that not only transgresses Mongolian conventions but also those of the supposedly more liberal West.

The Mongolian born director, writer and actress originally came to Germany at the age of five. Her first film Don’t Look at Me That Way won the FIPRESCI prize at Munich in 2015. During an interview she said: “I’m sure people will be shocked by the explicit sex scenes. I like sex. I like the intimacy of two people because I think it is the most exciting thing, but it is also the most normal thing. Fundamentally, we are here to fuck each other, so sex should be depicted as normal and natural.”

Sex is also a palpable theme theme, as it was in her debut. Set in Mongolia, and told with great verve and imagination, Black Milk sees two sisters meet up again after some time apart. Their names are significant in the context of the story – Ossi and Wessi – not very complimentary slang for Ex-East and Ex-West Berliners, the former nickname being particularly derogative.

Wessi (Borchu) leaves her abusive German husband Franz (a glowing Rogowski), and flies off to Mongolia’s capital Ulan Bator, before joining her family who live in the sparsely populated countryside, in a yurt. Her sister Ossi (Tsogzol) is not that excited to see her again, feeling she left for a better future. It takes a time for Wessi to re-acclimatise to this rural lifestyle, and she finds the male-dominated set-up tricky, until she strikes up a friendship with the much older Terbish (Demberel) who is also an outsider. Ossi resents her sister being home again, and Wessi finds the primitive routines difficult: having to get water from the well and watching the animals being slaughtered, even though she tries to overcome it, as we will see later.

Ossi’s stepfather Boro (Bawaa) warns Terbish not to get too close to Wessi. Later that night she dreams of being raped by an unknown assailant, warning him off by telling him her breasts will spray black milk. Milk is sacrosanct in Mongolia and highly prized. Wessi even prays to the Blue Mountain deity to help her get Terbish into bed, and later dreams they are having rampant sex. She watches Terbish kill a goat, and intrudes on a male gathering presenting sacrifices to the Blue Mountain deity. The stepfather reacts angrily: “Stop your sinful actions. Do not pretend you do not know our customs.” But when Ossi’s husband is late home one night, Wessi forces her sister to carry out a slaughter, even though it is forbidden for a woman do so. Ossi’s reaction leads to the film’s surprising conclusion.

Made on a small budget, and none the worse for it, Black Milk is a prime example of how a strong script can elevate a simple story into a tense and moving drama, with all the qualities of poetic realism and a potent feminist message, Borchu’s skilful direction leaves a lot to the imagination, and her performance as Wessi creates spirited onscreen chemistry with Tsogzol’s Ossi. Mongolia looks wild and exotic in DoP Sven Zellner’s panoramic landscapes and passionate close-ups. Let’s hope we see more of Borchu’s work, and soon. AS