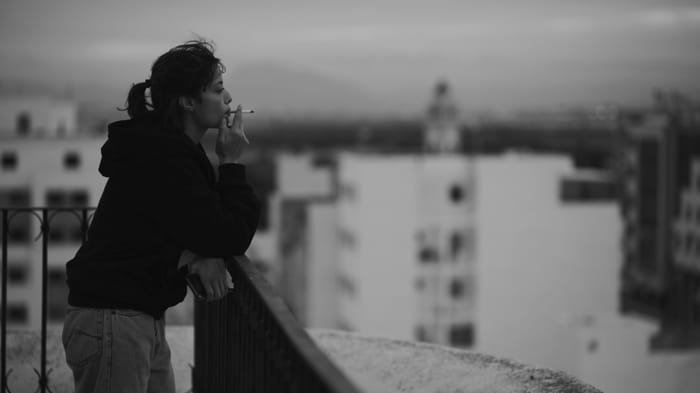 The Black Medusa Nada is in some ways emblematic of her home town of Tunis in this enigmatic fantasy thriller portrait of contemporary North African womanhood.

In this first feature Tunisian filmmakers Ismael and Youssef Chebbi are clearly supportive of their embittered main character – who choses not to communicate verbally – investing her with the power to hit back at the male-dominated Arab society where she has grown up in the aftermath of the revolution. Nour Hajri makes for a mesmerising Nada – the aptly named Black Medusa – who modestly goes her about her daily routine before diving into the nighttime shadows to prey on unsuspecting suitors.

Nada’s modus operandi is a ritual of revenge unfolding over nine. First, she poses as a sympathetic confidante to her male suitors – then she stabs them viciously, and seemingly with impunity. But her murderous behaviour soon rouses the suspicions of her workplace colleague Noura, who discovers a knife used in the attacks, and die is cast.

Underwritten characters and a slim but suggestive premise are clearly the result of the filmmakers budget constraints in a feature shot at lightening speed, and scripted in only two weeks. Enigma somehow works to their advantage here but not in the way they had anticipated with Nada serving the narrative as a beguiling counterpoint to the film’s much stronger (and in some ways more interesting) character – Tunis itself, gradually emerging in the nocturnal odyssey through this intriguing capital.

Stylistically brave in its striking black and white beauty and eclectic soundscape, the film makes for a slow and sinuous study of the nighttime antics of urban Tunisians in a voyeuristic expose of this classic coastal city with its ancient medinas and modern architectural flourishes and broad palm-fringed boulevards that will eventually lead to Carthage and Sidi Bou Said.

The directors meld Noir and Giallo styles satisfyingly in a memorable revenge thriller that serves as a sophisticated showcase to a siren-like capital city where a serial killer is on a voyage of discovery to liberate herself from the past. MT