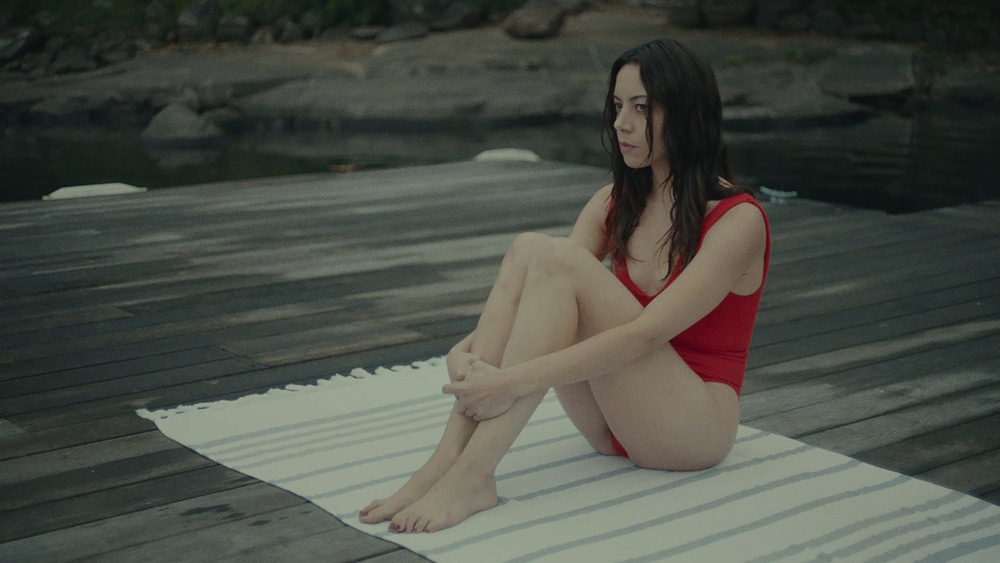 Writer/director Lawrence Michael Levine should have heeded home truths: if you have a good subject, stick with it, don’t shut it down halfway through. Particularly when your second part is a film-in-film story – a conceit that has frustrated countless directors – François Truffaut’s, Day for Night serving as an exceptional along with The Exorcist .

Part one (‘The Bear on the Road’) has an often re-played beginning, with actor turned filmmaker Allison (Plaza) sitting near a foggy lake, very decorative in her red one-piece swim suit. Finally, she gets up and leaves for the lake house, starting her script. Writer’s block sets in shortly after the opening title. Instead she goes, Cassavetes style, into war with her hosts, out-of work musician Gabe (Abbott) and his  pregnant wife Blair (Gadon). The couple bicker and fight, but instead of staying out of it Allison takes sides in a very underhand way.

The outcome is a coitus-interrupted and a rush for the hospital, all cut short by the titular bear appearing on the road. That’s a pity, because we really want to know what happens next. But the narrative makes a swerve into the same lake house scene, but this time we watch a film being shot. This time around Plaza deftly becomes Allison, the insecure actress, bullied and belittled by husband director Gabe (Abbott again) and threatened by Gabon’s Blair, who seems desperate to change roles after what went on in part one. But Levine doesn’t pull it off with this complicated, over talky second part, even the bear re-appearing near the end. Black Bears tries to be too clever, only to deliver second-hand histrionics in part two’s ‘Bear by the Boathouse’; ending in a rather lame repeat of the introductory shot.

Apart from the symbolic meaning of the titular bear, Levine withholds any reasonable explanations in part two. DoP Robert Leitzell cannot make up his mind if he is shooting a horror flick, or one of Woody Allen’s Bergmanesque features, falling, along with Levine’s script just between two chairs. The actors do there best, the peerless Plaza is always watchable, desperate a difficult role. Black Bear takes a rather tepid story and treats it like an exercise in meta-physics. In the end it’s just a blown-up B-picture. AS