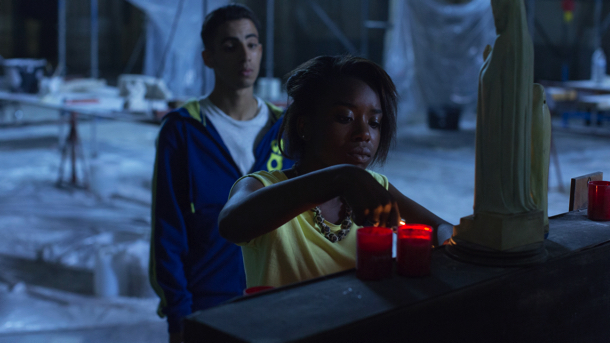 BLACK is true to its title; a dark and sassy thriller with a poetic twist that follows two vying gangs of disenfranchised Black teens through one of the most dangerous quartiers of Brussels wreaking destruction in their wake as they murder, pillage and thieve their way to Hell. Based on Dirk Bracke’s novels Back/Black, this timely drama brings to mind City of God, West Side Story and Romeo and Juliet, and is the feature debut of Adil El Arbi and Bilall Fallah whose only fault is the reinforcing of societal misogyny through camerawork that focuses much more on the female form during acts of violence than that of the male, and this is particularly evidenced during during Mavela’s rape.

Calling themselves The Black Bronx and the Moroccan boys, the two gangs are vehemently at loggerheads and composed of non-professional actors who add a touch of reality and bite to proceedings. When a love affair develops between rival gang members Mavela (Martha Canga Antonio) from the Bronx gang, and Marwan (Aboubakr Bensaihi) from the Moroccans, it brings out the best in the young North African and a chance for redemption that continually seems to slip through his fingers as luck is never on his side: ‘you can take a gangster out of the ‘hood, but you can’t take the hood out of a gangster’. Meanwhile, Mavela must choose between love and loyalty. There are other strands to the narrative that keep the action moving and the tension nicely tight in an intelligently scripted and grittily authentic urban drama that never outstays its welcome and modest 95 minute running time. MT

BLACK is released in UK cinemas & on VOD from Friday 19th August.