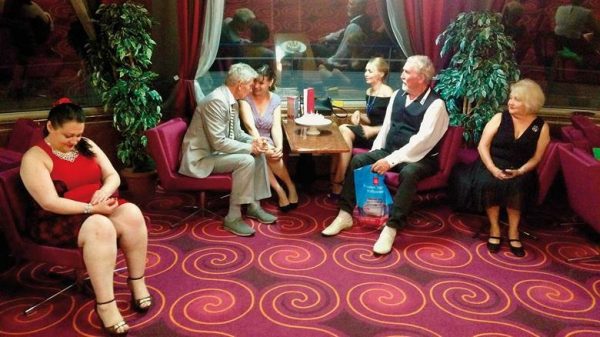 Russian couples pack their emotional baggage for a romantic voyage on the Volga in this entertaining but tonally offbeat curio from Polish filmmaker Jerzy Slodkowski (Don Juan).

Essentially a series of disparate encounters between its often disillusioned characters, Bitter Love tests the temperature of love in contemporary Russia and finds it either troubled or rather buttoned down, particularly where the men are concerned. The women are full of disillusionment but remain chipper and ever-hopeful of redressing the emotional balance or finding love again, even though the past has often given them a kick in the teeth, on the feelings front.

Sailing down the languorous waters of Russia’s most famous river aboard the appropriately named ‘Maxim Gorky’ riverboat, this upbeat documentary is as realist as it can be in scoping out romantic possibilities for a shipload of modern Russians, from all ages and walks of life, who we first meet setting off a cloud of coloured balloons each containing an ardent wish.

In the singletons corner there is Oksana (or Xenia) a middle-aged disillusioned romantic who shares her woes with Yura a bulked-up bodyguard type who actually turns out to be a bit of a softie, strumming his guitar and crooning like a troubadour. There is also petite Yulya who makes a bid for taller, older mate but soon has second thoughts.

Not all are footloose and fancy-free: it falls to an earnest young singer and her pianist playmate to set the tone musically with their classical accompaniment. Meanwhile, another older couple in a longterm relationship, Sacha and Lyuba, are clearly entering troubled waters – and even the odd set-too – threatening to rock the boat, both literally and metaphorically, but also adding a spark of humour to this river-bound odyssey of lost souls.

Apart from an interlude on dry land, or sand – as it turns out to be – this is a mostly close-up affair that pictures its protagonists in restaurant tete-a-tetes or in the intimacy of their cabins, but there’s a stagey artifice to these encounters that somehow doesn’t make them ring true, despite their earnestness. Compelling stuff nevertheless. MT