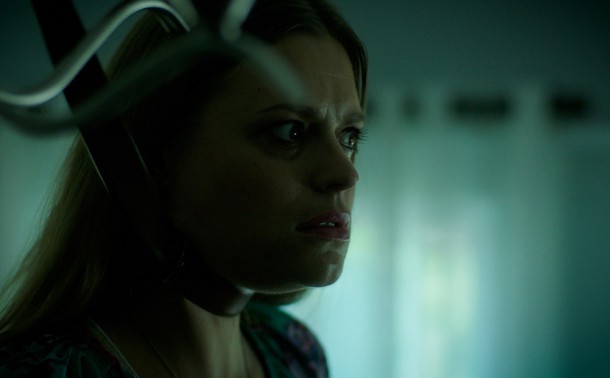 Writer and director Marianna Palka (Good Dick) also stars in her anarchic portrait of a woman pushed aside by her husband once too often. BITCH is a slim but taut and deftly-handled feminist parable – the sheer pace and untamed aggression making it gripping and watchable.

Jill (Palka) runs home and kids for her husband Bill (Ritter), who works for a city corporation and is hardly ever home. Spending most of his time in the office, he sexually exploits a dependent co-worker into the bargain. When she gets sacked in a widespread office cull, Bill puts in a good word for her, but is rebuffed by the boss and vents his frustration on his wife, undeservedly calling her a bitch. Something snaps in Jill and she turns into a vicious virago, making life hell for husband and four children, whom she has served efficiently for so long. Moving into the cellar of the family home, Jill starts growling and behaving like a violent dog. The family is obviously shocked, and Jill’s sister Beth (King) suggests a psychiatric home. But Bill is against the idea – what would the neighbours think?. But his absence from work costs him his job, and when his lover arrives, inquiring caringly about his wellbeing, Jill ‘smells’ her presence and goes berserk. Scots actress Palka is astonishly convincing in both animal and human form, and shows how ultimately behaviour, rather than negotiation, is sometimes the only way to bring change. DoP Armando Salas assists with a handheld camera, capturing the human dog during long runs through the neighbourhood. The jazz score by Morgan Z. Whirledge is just right for this explosive tale which should send alarm bells to all males of the human variety. MT