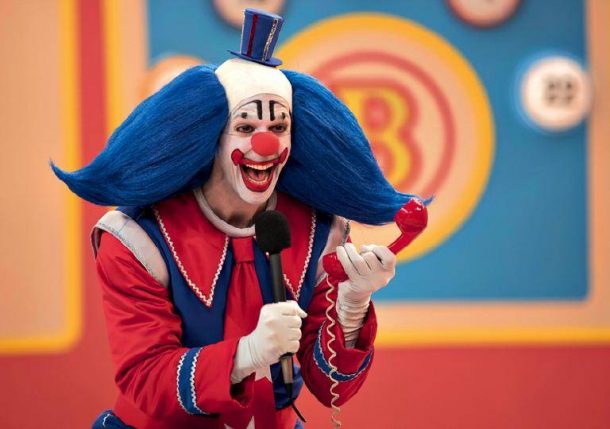 First time director Daniel Rezende, well known for his editing on features like City of God, offers up a vivid, almost lurid, but essentially empty biopic of actor turned children’s entertainer Arlindo Barreto, known here as Augusto Mendes. Very much in the style of a Tele novela, BINGO (aka Bozo) is larger than life, almost a caricature of his own caricature. In early 1980s Buenos Aires, we first Augusto Mendes (Brichta) getting by as an actor in soft-porn movies and bit-player in Tele novelas. But he craves fame, in order to impress his mother Marta (Torres) and much neglected son Gabriel (Martins). Somehow he lands the role of the clown Bingo in a morning-show for children’s television. Against the will of director Lucia (Leal), a born again evangelical Christian, he spices up his part and becomes an over-night sensation. But drugs and alcohol take their toll, and he gets the sack after nearly losing his life in a drunken debacle . But every cloud has a silver lining, particularly where Bingo is concerned. This Brazilian crowd-pleasing Oscar hopeful (it didn’t make the final list) uses every cliché in the book to put its message across. Certainly BINGO has its merits as a pure spectacle – Lula Carvalho’s eye-catching visuals are ferociously lively and colourful, but Rezende’s simplistic approach to the narrative makes Mendes’ conversion to religious zealot rather unconvincing: underlining the trusted caveat: Beware of features claiming to be “based on a true story”. AS

NOW ON RELEASE NATIONWIDE FROM 15 DECEMBER