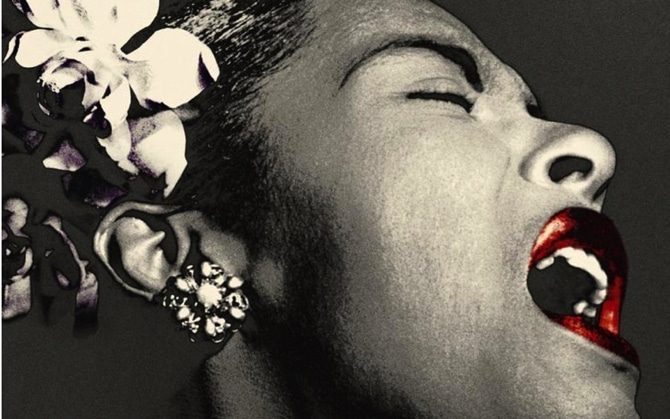 James Erskine’s documentary about one of the greatest jazz legends of all time pays exuberant tribute to its focus: Billie Holiday. Born Eleanor Fagan in Philadelphia, 1915, she would go on to enjoy a career spanning 47 years. Perhaps ‘enjoy’ is not the best way to describe Billie’s Holiday’s often troubled existence echoed through her plangent vocal style and sensual ability to manipulate phrasing and tempo. What lives on is her extraordinary talent in singing the blues through these unique recordings.

Erkine bases his impressionistic film on a stash of recording interviews by the late Washington based writer Linda Lipnack Kuehl, who dedicated eight years during the ’60s and ’70s to her informative book about Billie Holiday. And these interviews and recordings breathe new life into our knowledge of a talented jazz singer who rose to fame in the Harlem of the 30s and 40s and lost her life at just 44 after several decades of heartache.

Heartache is a soulful motif that floods Billie’s repertoire with 30′ tunes ‘If You Were Mine’ and “You Let Me Down” with band accompaniment from Count Basie, Teddy Wilson or Artie Shaw. But there were also more upbeat tunes about love such as “I’m Painting The Town Red to hide a Heart that’s Blue”. And the lively ballads “Twenty Four Hours a Day”; ‘Yanky Doodle Never Went to Town’. and the chirpy “Miss Brown to You” with Teddy Wilson’s wonderful orchestra (from the album ‘Lady Day’).

Through Linda’s recordings Erskine shines a light on a time fraught with poverty, misogyny and racism where women certainly got the rough end of the deal particularly in the music business. Billie inhabited these times with gusto and courage, lamenting them in her songs that reflect back on her deep need to be loved by men – and women, using drugs and alcohol to numb her emotional pain. Living in the fast lane also took its toll: “We try to live one hundred days in one day”. Her story was a sad one, recorded here for the first time from the other side of the microphone – through the memories of those who knew and loved her.

Harsher memories contrast with the warmth of these tribute echoing the exuberance of those early days of jazz, and the darker times – we hear from a vicious pimp who remembers beating the women under his power in an era where such events were commonplace in the backstreets of New York. But the police were often as venal in their approach to Billie, pursuing her day and night throughout her life because of her success as a black woman. “Wasn’t she entitled to have a Cadillac?” says drummer Jo Jones. But often Billie couldn’t even get service when dining in a restaurant. After leaving the Count, she was a black singer in a white band. Eventually she served time for drug abuse but on her release still filled Carnegie Hall with queues round the block.

Erskine doesn’t hero worship or quail away from controversy surrounding  the ‘false memory’ of many talking heads, reflecting how time can alter the perspective. Linda Lipnack Kuehl doesn’t let her interviewees off the hook, demanding they justify their recollections. A case in point is Jo Jones’s strident claim that producer John Hammond sacked Billie from Count Basie’s band for not sticking to the blues. Hammond vehemently claims the sacking was for financial reasons.

What emerges is the soulful emotion of a talented artist who by definition was subject to highs and lows in giving of herself to her art and this comes across in visceral archive footage – particularly of ‘Strange Fruit’ – and live recordings that celebrate this timeless singer whose talent will never diminish.

It eventually becomes clear that one of her biggest fans was Linda Lipnack Keuhl who was there throughout her career, feeling a close affinity with Billie and her struggle to succeed, despite their different backgrounds at a time of racial segregation and strife. As Linda points out – the musicians were black but the critics, agents and managers were white. Thanks to Linda’s inquisitive style of journalism this tribute to Billie comes alive. MT

BILLIE is available, on demand, from 13th November on BFI, IFI, Curzon Home Cinema, Barbican. There is a live Q&A with James Erskine on 15 November as part of EFG London Jazz festival and it will be available to buy on Amazon and iTunes on 16 November.

THE QUINTESSENTIAL BILLIE HOLIDAY | Volumes 1,2,3 accompanied by Teddy Wilson and his Orchestra.