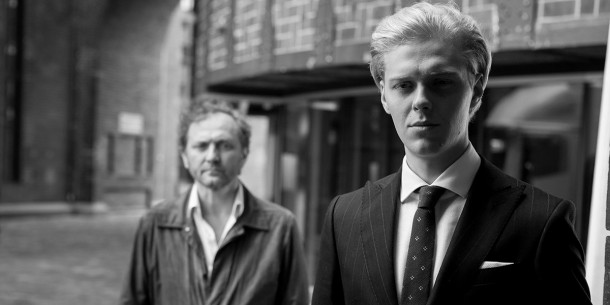 Urszula Antoniak’s (Code Blue) fourth feature is a melancholic and moody portrait of Michael, a young, Polish born lawyer in contemporary Berlin who, in spite of his German citizenship, feels alienated in the superficially glamorous German capital. Luminously captured in ice-cold black-and-white by Dutch DoP Lennert Hillege, this is a modern version of Musil’s Man without Attributes.

Michael (Gierszal), blond and blue-eyed like a Napola graduate, is asked by his boss Franz (Löber) to take the pro-bono case of an African poet claiming asylum in Germany. But it turns out that the pair have met before and Franz has turned into a proud philosopher questioning the right of nationality with Michael who rejects the case when Franz reminds him of his own origins, commenting “You are very different when you talk Polish. Like a little boy”.

Out of the blue, Michael’s father Stanislaw (Chyra) appears at his doorstep. Stanislaw has been in hiding after some trouble with the authorities in Poland (it is not clear if these were pre-or past 1989), he doesn’t stay for long but his visit leaves his son more insecure than beforehand. Franz emerges an isolated and avoidant figure with few friends apart from a Polish waitress, Alina (Wasilewska from Ida) who, in vain, wants some commitment from him. His dilemma is perfectly illustrated in a short exchange with his father who asks if he feels accepted: “They can’t ignore me”, comes Michael’s reply. “But is that enough?” says the father. “For a start, yes”.

Antoniak emigrated from Poland to the Netherlands, and her own background obviously comes into play with her character Michael – who takes  a while getting used to his father calling him by his given name of Michal. Clearly he is trying to bury his past, and apart from a yearly visit to his mother’s grave, he obliterates his Polish identity. But in spite of being a qualified lawyer, he remains an outsider, his friendship with Franz is very one-sided: Michael tries to copy him like a chameleon, without really liking what he sees. Franz, ironically, treats Michael like an exotic animal but never as an equal. Apart from a sequence towards the end, Michael controls himself rigidly, he treats himself like a work in process. In spite of a weak ending, Beyond Words is a fascinating study of estrangement in a place where the past is barely concealed under a forced modernity. Michael lives an a-historical life in Berlin, ignoring his roots, not wanting to be reminded that he too was once an immigrant. His brittle personality allows him to function in his job; but he is indifference personified.