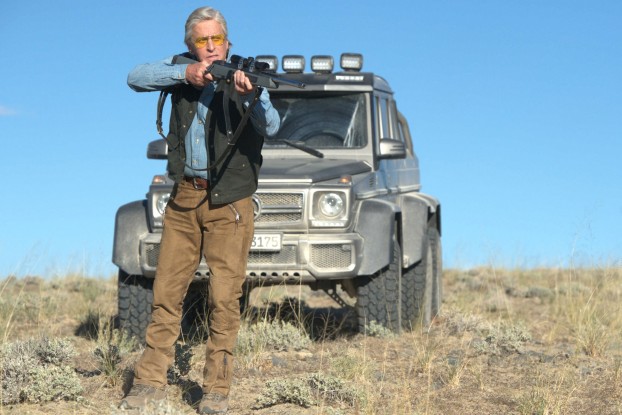 A schematic battle of wits plays out against some rather splendid widescreen desert scenery in this bone-dry endurance test from French director Jean-Baptiste Léonetti (Carré Blanc). In contrast to the searing success of Lee H Katzin’s 1974 TV original Savages, this fails to deliver thrills or spills even with Michael Douglas as a sadistic gun-slinger, and Jeremy Irvine’s sunburnt good guy.

Douglas (Madec) arrives in the Mojave desert at the wheel of a souped-up SUV, pretending to be a City hot shot on the hunt for off-season game with his hired tracker Ben (Irvine). But a psychopathic streak gets the better of him when he ‘accidentally’ turns his hand-made gun on the local humans, taking out a local cave-dweller in the process (Martin Palmer), then attempting to bribe Ben to cover up his crime and lie to the local sheriff (Ronny Cox). Anxious to make some money, Ben agrees to Madec’s demands when it transpires that Madec will finance him through college and secure a lucrative City job to lure his girlfriend into (Lawrence) into a more permanent liaison. But when Ben draws the line at disposing of the body, Madec plays dirty, forcing him to strip down to his boxers and walk barefoot across the wilderness in a bid to survive.

Armed with a shoddy script our tediously miscast duo desperately make their way through Navajo country, a dissipated Douglas goading the saintly, sun-scorched Irvine through a series of trials and tribulations from the comfort of his air-conditioned Merc. It all plays out like some ghastly face-off between the Devil and a scantily-clad ‘Jesus’ in the wilderness. But on this occasion there’s no redemption in sight. MT