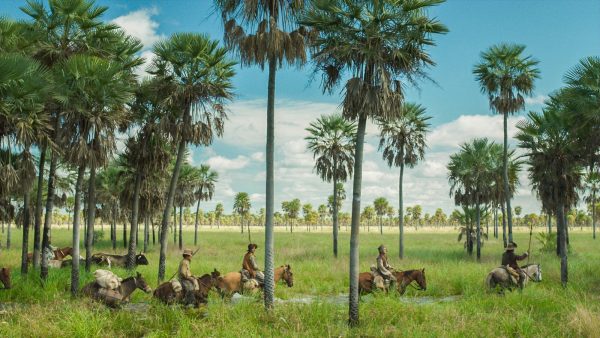 After Dogtooth, Jorgos Lanthimos comes up with an even more bizarre take on human frailties. Alps is the name of a hospital group who offer suffering relatives a unique service: they will impersonate the deceased for a while, enabling the families to come to term with their loss. Needless to say, that this causes a whole host of complications. There is an anarchic wildness at play here, which makes Alps much original than Lobster. which was to follow. Lanthimos crafts an absurdist play, very much in the tradition of Aragon and the early Bunuel. 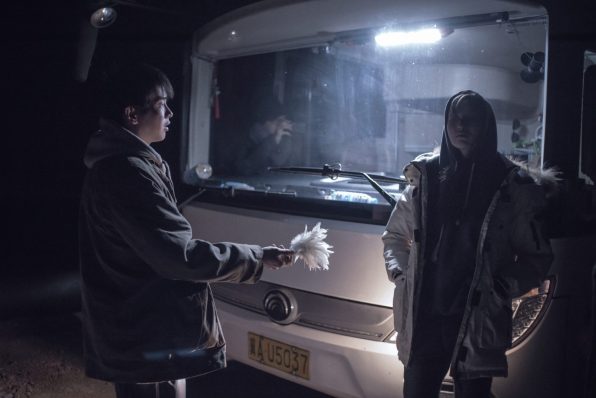 Hu Bo’s one and only film is a true masterpiece. The Chinese director committed suicide before the end of the shoot after falling out with the production company over feature’s running time. Equally sad and poignant it plays out like Balzac’s ‘comedie humaine’, Hu Bo keeping the elliptical narrative going, always coming up with new plot-twists for his four characters to meet under new circumstances in their urban backdrop. Chao Fan’s camera pans relentlessly through the jungle of hideousness, the environment echoing Bela Tarr’s vision of dystopia.

Filipino filmmaker Lab Diaz follows his four hour Silver Bear winner A Lullaby to a sorrowful Mystery, with this opaque revenge drama that clocks in at 226 minutes and bagged the main prize at the Venice Film Festival of the same year. Diaz once again focuses on his wartorn and impoverished homeland with echoes of Metropolis, early Eisenstein works or Mark Donskoy’s first part of his Gorky trilogy My Childhood. The main character Horacia walks the nightly streets like Murnau’s phantom. The glacial pacing contributes to a nightmarish atmosphere, the blackest of noir. Horacia uses different names for herself, indicating that her personality is splitting. We see the shadow world she moves in, out of her POV: the focus becomes more and more blurred, particularly during a scene at the beach. Once again, the past takes over the present, destroying Horacia’s identity. For those who have never experienced Diaz’ work, his magnetism is difficult to convey: we are literally drawn into the narrative for the entire running time.

Director Andrey Zvyagintsev and cinematographer Mikhail Krichman strikingly composed  political drama affirms a sense of existential hopelessness. The characters’ vulnerabilities, and the sense that their homes offer inadequate sanctuary are a recurring theme in Zvyagintsev’s work.  Leviathan references the Book of Job and indicate government corruption through figures such as Boris Yeltsin. Everywhere is a profound sense of moral loss. A real Russian Noir where the victims are without hope or redemption. 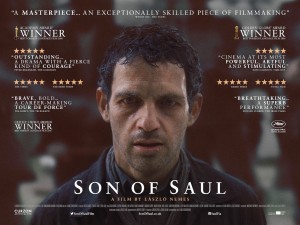 The young Hungarian director’s debut is a tour-de-force of suffering. Set in a nameless concentration camp, it features Saul Auslander (Geza Rohrig) as a Sonderkommando in the Auschwitz death camp in October 1944. Sonderkommandos were units of Jewish prisoners forced to perform grisly tasks on their own dead, knowing very well they too would be executed in due course.  Shot totally from the perspective of his main character Saul, Laszlo Nemez accomplishes a frightening directness. Everything is happening right in front of our faces in this journey into the darkest hell.

THE LAST OF THE UNJUST – Claude Lanzmann, France

The documentary takes its title from the main protagonist: Rabbi Benjamin Murmelstein (1905-1989), who was the third and only surviving “Jewish Elder” “of the Nazi concentration camp Terezin (Theresienstadt). Nothing can compare with the role of a “Jewish Elder”, a position invented by the Nazis in camps and ghettos to divide the Jews by making the Elders do much of their dirty work. The Elders were permanently in conflict with the German authority and their own people. They were mistrusted by their own and despised by the Germans. And most of them went to the gas chambers themselves. After including Murmelstein’ story in Shoah, Lanzmann decided, that his story should be told at length in a separate film. Murmelstein was sent to Terezin in 1942, just after the city had been cleared of their Czech inhabitants. Terezin was meant as a Ghetto for the elderly, many German Jews “bought” their places in this “retirement” town from the Nazi authorities, paying with their savings. It turned out to be a death camp like all the others: over 33 000 Jews, mostly elderly, died there, apart from the 88, 000 deported to the Gas chambers. Lanzmann works with the same rigour as always: the devil is in the detail.

Written and directed by Argentine Lucrecia Martel (The Headless Woman), Zama is an adaptation of a Latin American classic by Argentinian novelist Antonio di Benedetto, who was imprisoned and tortured during his country’s Dirty War in the 1970s. Influenced by Dostoevsky the film’s hero Don Diego de Zama (Daniel Gimenez Cacho), had a lot in common with his Russian literary counterpart.  The action takes place in the sun-baked South American pampas during the last decade of the 18th century. Zama is an officer of the Spanish Crown, stranded in this backwater for what eventually becomes the rest of his life. Llamas and other livestock wander blithely across the streets, the bumbling corruption unfolds to a backcloth of Guarani folk who watch on dispassionately. The governor wears a shrivelled trophy – a pair of ears – which we are told –  belonged to a master bandit, who has recently be executed. But later, Zama will learn at his cost, that the bandit is alive and well. Zama is part horror, part magic realism, a wonderful mixture of images and symbols.

ALL OUR DESIRES (2011) Philippe Loiret, France

Directed by Philippe Lioret (I Am Alright) and based on a non-fiction book by Emanuel Carriere (Other Lives but Mine), this is an emotionally taxing feature that sees a young judge (Marie Gillain) facing up to an incurable disease and mounting a widescale case against a financial body that exploits the poor. Despite potential melodrama Loiret offers a spare and restrained treatment with brilliant performances, Lyndon playing, as always, the calm stalwart of the underprivileged. One of the most admirable yet gruelling films of the decade.

Suchsland, inspired by Siegfried Kracauer, explains – in a sleek 2 hours – how the Geman cinema of the Weimarer Republic prepared the country for Hitler and the Nazis. Suchsland follows the thesis of Siegfried Kracauer (1889-1966), a German film critic and journalist, friend of Benjamin and Adorno, who in his psychological history of the German film with the same title as the film (published 1947 in emigration in New York) – which is still the most well known German film-history book. In his documentary debut Suchsland traces the correlation between screen action and the psychology of the defeated German masses. According to Kracauer, “M” was Lang’s first serious film for over a decade. Together with von Sternberg’s Blauer Engel (1930) and Berlin Alexanderplatz” (1931) by Piel Jutzi: these three films marked the end of any serious critique of the right in the Weimarer Republic in films, whilst Pabst Westfront 1918 (1930) at least tried a pacifistic view of WWI, and Kuhle Wampe by Dudow (after a script by Brecht) showed a communist alternative to fighting unemployment. But the “National Epic” was soon back: The Last Company (1930) by Kurt Bernhardt; Der Schwarze Husar (Gerhard Lamprecht 1932), Prussia (Carl Froehlich 1931), Gustav Ucicky’s York (1931) and the never-ending five “Frederikus Rex” films with Otto Gebühr in the title role. And it was no accident that the list of films premiered in 1933 included many titles, which were produced before January 30th 1933, like the U-boot film Morgenrot by Ucicky. Kracauer/Suchsland prove, that all of Germany at the time was at least subconsciously aware that the most dangerous psychopath would soon take the position of the director of the asylum called Germany.

Samuel Moaz follows up on his brilliant Lebanon with an even more impressive feature: Foxtrot is a story of bereavement and denial of guilt, played against the background of a middle-class Jewish family in Tel-Aviv.  Michael Feldman (Ashkenazi) and his wife Dafne (Adler) live in a spacious, expensively decorated apartment, which feels like a five-star hotel suite. When they learn about the death of their soldier son Jonathan (Shiray), Dafne faints, whilst her husband is cold and aggressive, even kicking the family dog, who wants to console him. But the Feldman family is only a cypher for many Israeli families in a country, which is at war for nearly 70 years. “This is war, and shit happens in war” says the Israeli general to the soldiers after another needless killing. Maoz captures the absurdity of this permanent war in hilarious scenes at the roadblock, mixing phantasy with reality, and contrasting the hell of war with the cool and sober apartment of the Feldman family: the two levels, at home at once in one country, have seemingly nothing in common. But it is the denial of those at home, which makes Israeli soldiers kill and being killed for over forty years. Sombre and without illusion. AS