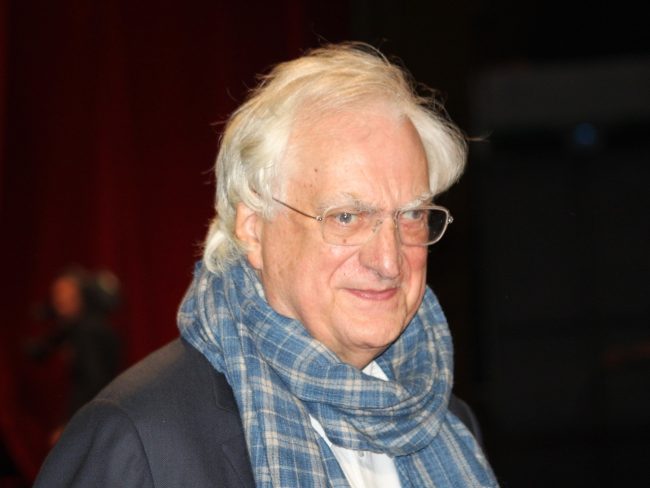 In December 2019 Marrakech Film Festival paid tribute to the career of noted French film director, agent, critic and producer Bertrand Tavernier – who has died at 79 – with an expansive retrospective of his films in the presence of the director himself.

Ironically, Tavernier is perhaps best known for his 1980 feature Death Watch (La Mort en Direct), a drama set in the future, when death has become very rare. It tells the story of Katherine (Romy Schneider) who finds she has an incurable disease. NTV, a major television network headed by the unscrupulous Vincent Ferriman (Harry Dean Stanton), orders cameraman Roddy (Harvey Keitel), a casual acquaintance of Katherine, to film her last days via an implanted camera/transmitter behind his eyes. When Roddy sees a live-show of Katherine on TV, he is so disgusted with himself he owns up to Katherine. But there’s a twist. The implants will lead to blindness if Roddy goes through long periods of darkness, so he can only sleep for a short bursts, and has to carry a flashlight all the time. Engulfed by his feelings for Katherine’s impending death, he suffers nervous a breakdown and loses his flashlight. When Katherine finds it, she shines it in his eyes, but he is already blind. The two visit Katherine’s estranged husband Gerald (a masterful Max von Sydow), who tells Katherine there has been a mistake and pleads with her to reconsider their relationship. But Katherine takes an overdose instead and dies, leaving Roddy and Gerald furious, wanting to kill Ferriman.

Tavernier started life as a film critic for both Cahiers du Cinema and Positif between 1961 and 1971, after having given up on his law studies in Lyon. In his documentary My Journey through French Cinema (2016) he talks about this time casting a rather uncomplimentary light on Cahiers’ writers turned filmmakers: “They were great self-promoters, because they had been journalists, and they convinced Americans they were left-wing, despite writing for right-wing publications. Godard was not a leftist, he was one of the worst contemporary tyrants”. To be fair, Tavernier also accused compatriot filmmaker Jacques Becker (Le Trou) of being a control freak “even telling the composer of the music, which notes to avoid”.

Many of Tavernier’s features are about loneliness. In his 1976 drama The Judge and The Assassin (1976), his regular collaborator Philippe Noiret is Judge Rousseau, who holds the fate of serial killer Bouvier (Michel Galabru) in his hands. Both men change during the process with Bouvier being able to talk about the process which made him kill children. Rousseau, who had a very clear view of guilt before, admits for the first time that his intransigence is part of his own isolation. The Judge and the Assassin has a lot in common with Tavernier’s debut The Clockmaker of Saint Paul (1974), based on a Simenon novel in which a grieving father tries to come to terms with alienating his son.

Political thriller Quai d’Orsay/The French Minister (2013) deals with the France and Germany resistance to the Iran War by the USA and UK government. Arthur Vlaminck (Raphael Personnaz) is a script-writer for the Foreign Minister Alexandre Taillard de Worms (Thierry Lhermite)  – based on the real life Dominic de Villipen. Arthur soon finds out the ministry is really run by Claude Maupass (Niels Arestrup), who seems phlegmatic, but is really in charge of affairs. Arthur, under fierce competition, finds a friend and ally in Maupass. The films ends with the speech by de Villipen before the UN, contradicting Donald Rumsfeld and Colin Powell before the Security Council.

Later in his carer Tavernier chose to delve into costume dramas, Let Joy Reign Supreme (1975) was a prime example. In the early years 18th France, Philippe II of Orleans (Noiret) is the regent for young Louis XV. Philippe has no real power, and hopes to raise his country’s stakes with the help of the priest Guillaume Dubois (Jean Rochefort). There is a gruesome autopsy of a royal lady who lived a life of debauchery which included incest with her father. When a court conspiracy, lead by the Marquise of Pontcallec (Jean Pierre Marielle), looks like it might spark a revolution, Dubois, to the chagrin of Philippe, turns out to be an opportunist trying to elevate himself as an archbishop. For Philippe, the only hope is a proper revolution.

The Princess of Montpensier (2010) is a mixture of fiction and history, leading up to the Bartholomew Day massacre of 1572 when Catholics were slaughtered by Protestants. The religious battle between Catholics and Protestants led to infighting in the Royal family and the nobility in general. The fictional story is centred around the titular heroine (Melanie Thierry), who is married to the Prince of Montpensier (Gregoire Leprince-Ringuet), but is still in love with with the Duke of Guise (Gaspare Ullieil), whom she knows since childhood. The fate of her marriage and love affair is closely linked to the religious turmoil, with the Princess being unable to convince anybody to keep the peace. AS