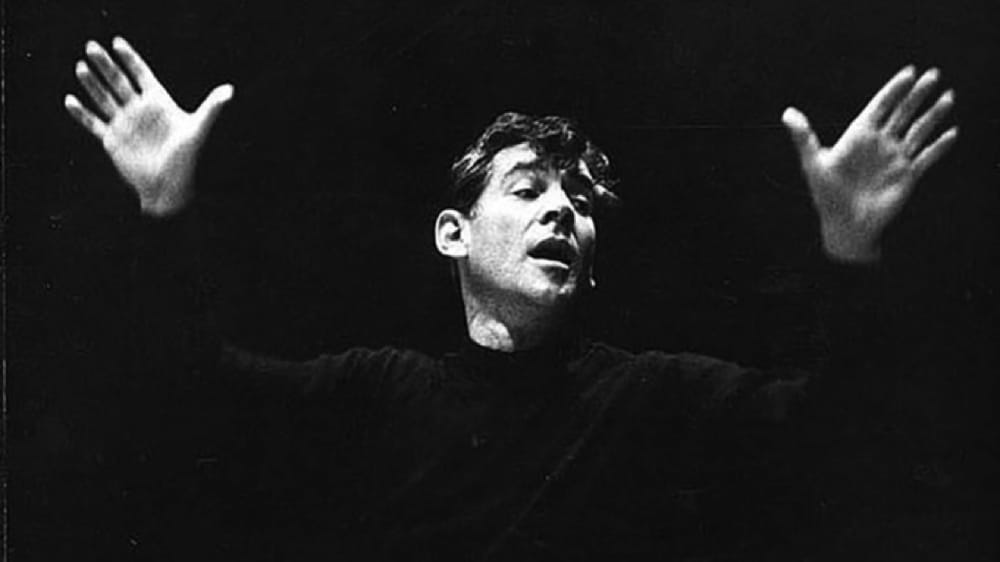 Leonard Bernstein became a household name for his ground-swelling score of modern Broadway classic Westside Story. In those days to be a twenty-something Jewish immigrant conductor was unheard of. But Bernstein was determined to bring music to the mainstream and it was this democratisation of his craft and the arts in general that made him his place in history.

Bernstein came from a non-musical background in Boston. His father – whom he described as a cold, authoritarian tyrant  escaped Italy on an ocean-liner and settled in Brooklyn to ply his trade as a fishmonger.

Directed by Douglas Tirola and narrated by the composer himself in modulated engaging tones, Bernstein’s story unfolds in a didactic but fascinating way, enlivened by a wealth of personal photos and archive films – and of course, audio footage in a rich musical score. In these vivid scenes Bernstein comes across as an inquiring free-thinker, his lustrous dark curls framing an opened-faced sensual masculine beauty that only got better as the years rolled by.

Cultural ambassador, artist, teacher, and philosopher, the musician’s gift to the world was his ability to bring classics to everyday audiences who would mostly see his prodigious passionate outpourings on the television during the 1950s when he was known for his CBS arts series Omnibus in 1954.

Although classically trained Bernstein developed an eclectic interest in all kinds of music, jazz and opera blurring the lines between class and culture sealing his reputation as an iconic figure whose talent would unify, engage and entertain.

Training at Tanglewood, Bernstein would soon gravitate from Boston to New York where he took to the conductor’s podium with ease and aplomb wafting aside his radical background with charismatic determination, thanks to his supportive mentors Serge Koussevitsky and Aaron Copland.

Romantically it was plain-sailing for the affable family-orientated conductor who fell for Chilean American actress Felicia Montealegre, snippets from their early love letters rendered in graceful black and white graphics. Soon he had a son and a daughter and needed to support them all. From modest beginnings in Carnegie Hall, The New York Philharmonic beckoned in 1958.

Bernstein’s way of engaging his audience was to give a rousing introduction to his dynamic stage performances – offering an entente cordiale in Russia, or laced with a political agenda at home – but always brimming with a febrile physicality as his quivering body conveyed his excitement and passion for music via the orchestra to the audience: “music keeps me glued to life even when I’m depressed”.

Tirola adds political and social footnotes. Felicia, a keen pianist and obedient fifties wife, saying all the right things, yet clearly sharing her husband with another muse, music itself. But also a burgeoning yen for men – an episode which is discretely conveyed in those same black and white graphics. And Felicia admits his confused sexuality clouded their marriage of 27 years although it was undoubtedly happy and fulfilling for a time, his homosexuality is never explored.

Politics and leftist activism takes centre stage during the Kennedy years as Bernstein increasingly warms to his role as conductor for social change, using his reputation and art to promote peace, equality and racial harmony. In Alabama he is seen joining fellow jazz musicians in a peace rally, and visiting Jerusalem to give a rousing speech on the Mount of Olives. And there snaps from his well-publicised and misinterpreted soiree in support of the civil liberties for the Black Panther party – leading to Tom Wolfe’s coining the derogatory phrase “radical chic”. This all caused a vicious backlash on the Bernsteins and a storm of critical hailstones in 1970 his subversive stance drawing suspicion from Richard Nixon.

The film coming to a satisfactory close with footage of Bernstein conducting the Ninth Symphony in East Berlin in 1989 as part of the celebration of the fall of the Berlin Wall. To mark that reunification, he rewrote part of Friedrich Schiller’s text for the “Ode to Joy” movement, and had the choir substitute the German word for “freedom” in place of “joy.”

Tirola’s warm but not hagiographic approach allows for an enjoyable and immersive look back at the conductor’s fascinating life. Of his own musical choices Bernstein talks glowingly of Beethoven although his West Side Story work is almost entirely absent, apart from a few visuals. We are left with the impression of a genius but never a showman, a true artist absorbed and taken over by his obsession – a true conductor if ever there was one – music was the lightening bolt that set Bernstein’s life on fire. MT