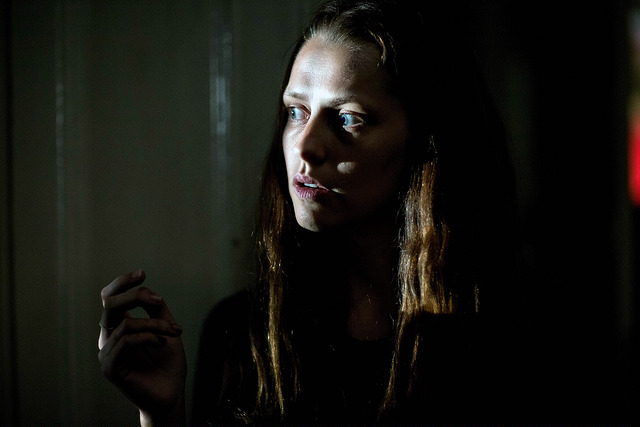 Even if you don’t always agree with Cate Shortland’s point of view – Lore was a case in point – she has a special style –as in this variation of John Fowles’ The Collector, filmed in 1965 by William Wyler.

Australian tourist Clare (Palmer) is somehow lost in Berlin, and when she meets handsome Andi (Riemelt), an English teacher, she abandons her journey to Dresden, and stays with him. The sex is satisfying, but Clare soon finds out that Andi wants to keep her for good, as his prisoner: her Sim-Card disappears, the windows of the flat in the otherwise empty apartment block don’t open, and the door is double-bolted. Andi is a lonely person, his only real contact is his father Erich (Habich), a university lecturer, who, contrary to his son, has some positive feelings about living in the old GDR. Andi’s mother ‘defected’ to the West when he was a child, something he will never forget or forgive. Clare oscillates between fighting (both are seriously injured) and trying to coax Andi to release her. After the death of Erich, the two even spend a rather harmonious Christmas together in the house of the dead man. Andi adopts his father’s dog, and Clare is happy to have some company, when Andi is at work. But Andi’s true nature is soon revealed. A chance encounter with Franka (Bading), one Andi’s female students, who visits her teacher, leads to a surprising, but well constructed, original conclusion.

The title refers to the claustrophobic atmosphere, which to this day, hangs over a united Berlin. Neither the neon-glitz of the western part of the city, nor the much less kempt part of the old east, lets us forget what happened here between 1933 and 1945. The fate of over 300 000 Berlin Jews, who were first excluded from public life and had to hide in their flats, before being deported from Grunewald Station to the extermination camps, still hangs over the city. And an involuntary wall, the GDR rulers erected, showed that Germans, whatever the ideology, are very good at creating a Huis-clos status. When it becomes clear that Clare is not the first of Andi’s victims, she even allows him to use her more and more as a sexual object: he is more interested in taking photos of the helpless woman, than having sex with her. He can only function if there is a woman substitute for his hated mother.

Palmer and Riemelt are convincing, both Erich and Franka seem to be only there to drive the plot forward. This is a shame, because we would have liked to learn more about Andi. The length of nearly two hours is also problematic: the tighter structure that writer Shuan Grant adopted for Melenie Joosten’s novel, would have kept the audience more engaged. DoP Germain McMicking’s images are strongest in the indoor scenes, whilst the Berlin panorama is a little too idyllic. This is a sometimes provocative, but always original production. AS

NOW ON GENERAL RELEASE AT CURZON CINEMAS FROM 9 JUNE 2017