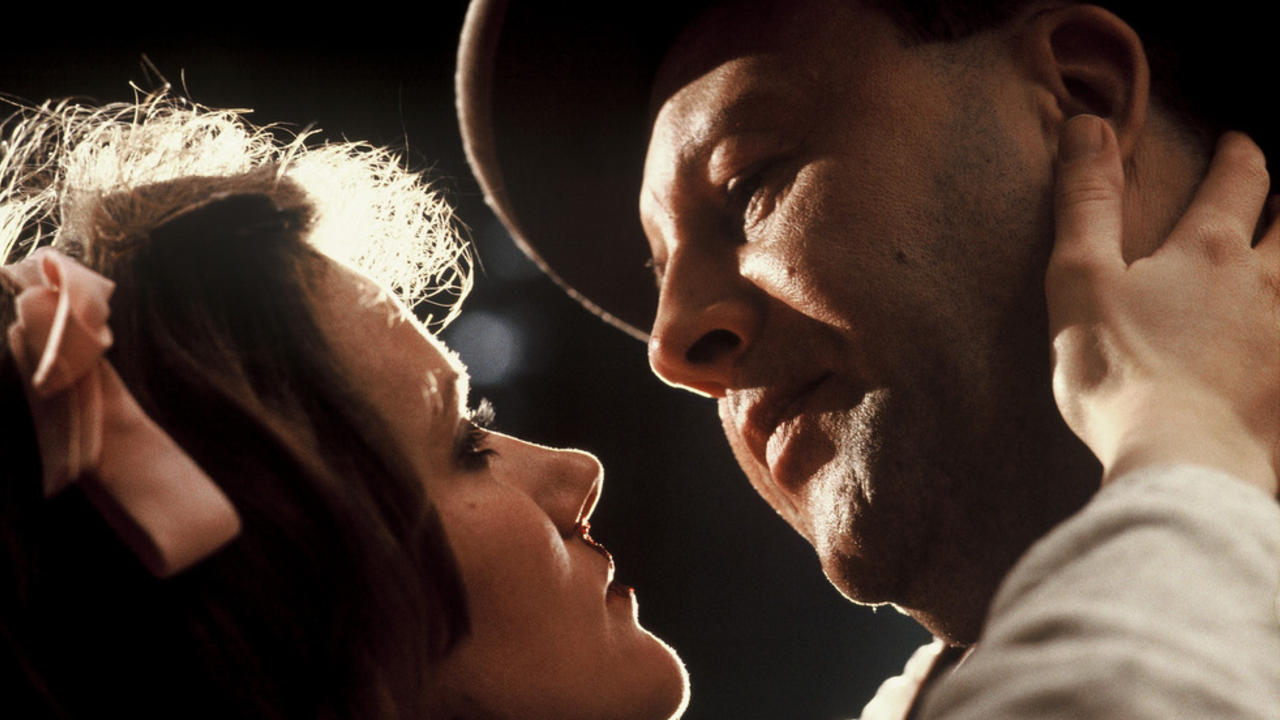 This captivating 15 hour odyssey is Fassbinder’s adaption of Alfred Döblin’s 1929 novel of the same name. It is the story of two men who can not admit their love for each other, and go on to destroy themselves and the women they become involved with. At the same time, it is a symbol of advancing Fascism in the Germany of the Weimar Republic – of which Döblin (1878-1957), a practising psychiatrist and novelist, became a victim himself, and was punished with emigration for being Jewish.

Berlin Alexanderplatz is often compared to James Joyce’s Ulysses and Don Passos’ Manhattan Transfer, two contemporary novels where the protagonists play a major part. Fassbinder has translated the associative structure of the text into an impressionistic portrait of the German capital, where half-sentences and poster texts mix with a permanent flowing traffic: a city which never sleeps, everything dazzles and glimmers. But the chaos of words, sounds and thoughts covers the growing infection with the Fascist bacillus, a regime which promised a new order of certainties.

Franz Biberkopf (Lamprecht) has just been released from prison, after serving four years for strangling his girl friend Ida. He is forbidden by the Police to live in certain areas of Berlin because the milieu might make a recidivist of him. Franz is working as a hawker, selling necktie holders, but he has not the gift for the gab, and finds it impossible to make ends meet, so he is talked into selling the Nazi newspaper Der Volkische Beobachter, even though some of his Jewish contacts warn him of the consequences. Unfortunately, Franz does not want to take on board their efforts to protect him and he sinks further and further into the negative influence of this misguided political movement, where robberies are supposed to benefit the NSDAP, but more often than not serve only the perpetrators. Franz gets to know his nemesis Reinhold (John), a sort of underground leader. Reinhold get quickly bored of his girlfriends, and Franz “inherits” them. One of them is Eva (Schygulla), who once worked for Franz on the streets of Berlin. But his true love is Mieze (Sukowa), who is only too glad to lose Reinhold as her pimp. But Reinhold is jealous of Franz’ chance of a happiness, and he murders Mieze, before throwing Franz from the back of a truck, after a robbery. Franz survives, but loses his right arm – ironically, he cannot perform the ‘Heil Hitler’ greeting anymore. An epilogue sees Franz recovering from his psychosis in a closed psychiatric ward where he suffers from nightmares: dreaming of the atomic bomb and other Armageddon-like events. In the end, he is prepared for work in a Fascist society, but becomes very much a prisoner of the system.

This impressive endeavour, described as the longest film in history at 900-plus minutes, is photographed brilliantly by Xaver Schwarzenbeger (Querelle, Lilli Marlen). With a cast and crew of over a hundred, most of them Fassbinder regulars – such as composer Peer Raaben and editor Juliane Lorenz – Berlin Alexanderplatz is the director’s greatest opus: the homoerotic element of German Fascism symbolised by the bi-polar love-hate relationship between Franz and Reinhold, causing (self) destruction first on a private, then on a worldwide level. AS

AVAILABLE from Second Sight as a LIMITED EDITION BLURAY BOXSET ON 23 JULY 2018 | Complete with a luxury 60 page perfect bound book.