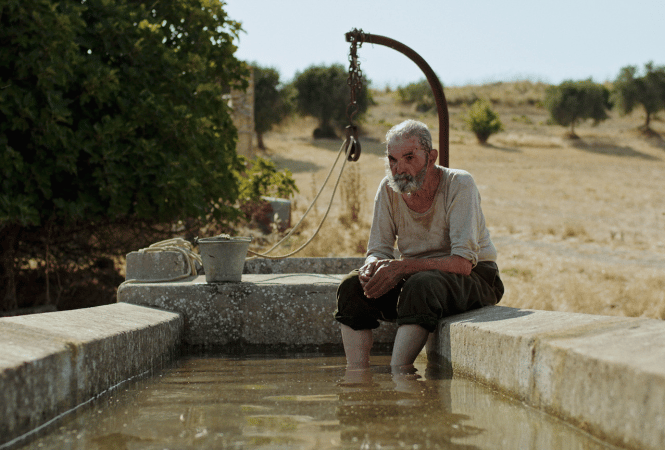 In a sun-backed hillside in the arid plains of Sardinia Raffaele is sleeping out in the open waiting for the wind (il bentu). So as not to be late when it finally comes he has massed up his little pile of grain, which will last him for the coming year. The most important thing in his life at the moment is this wind, it’s also the title of this tough but enchanting moral fable that reflects on self-discipline for young and old alike.

For the next few days Raffaele has left his wife back in the village and must wait patiently for the wind to help him separate the grains from the chaff, so he can make bread and earn his livelihood. And his grandson Angelino, who visits him during this lonely time in the open fields, must also wait – to be old enough to ride Rafael’s treasured mare Turtledove.

Darkness falls and Raffaele eats an omelette by candlelight before spending the night in wild anticipation of the weather to change and imploring it with ancient songs and supplications. Come morning he tidies up the field in readiness for the whiff of air to blow up from the sea, and tells his little grandson off for arriving unwashed and unkempt to help him. He talks about the need to look sharp in today’s world where the boy may find himself one day driving machinery rather that sweeping the straw around like his grandfather. Although the old man takes a dim view of modern intrusions like the thresher.

In his primitive shack Raffaele hollows out a hunk of bread and fills it with creamy curd cheese from a blue bowl. And all the time Angelino asks when the horse will be ready. “When you’re grown up”, Raffaele tells him. And during their time together he initiates Anglelino into the ways of the world reprimanding the boy for leaving the freshly churned milk in the sun. Meanwhile the gruff old man goes about his daily duties: pumping water from the well, washing and clearing up while his grandson tries every trick in the book to let him ride the mare until it’s too late.

Sun-based Sardinia is very much a character here and Francesco Piras creates an evocative sense of place with his limpid hyper realist images in a feature that relies on its ambient soundscape, folkloric music and simple dialogue.

Sardinian filmmaker Salvatore Mereu was inspired by a story from poet and novelist Antonio Cossu (1927-2002 to make his feature, simple in execution and storyline yet wide-reaching in its themes, Bentu is all about the impatience of youth; the intrinsic value of staying in rhythm with the natural world and respecting time-honoured traditions in a place where time seems to stand still as the future marches on. MT