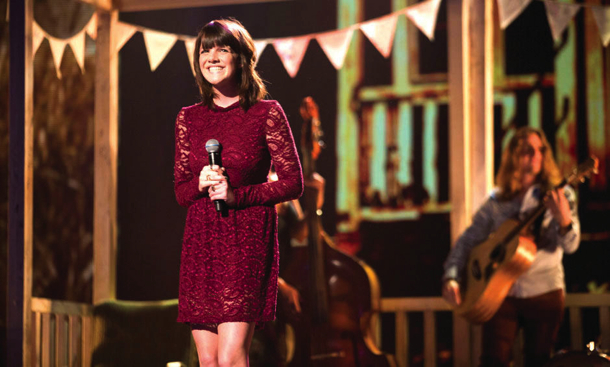 Benny and Jolene are a folk-duo who fall into the hands of the music industry whose incompetence is even worse than the songs of their charges. In a caravan on tour in Wales, followed by Joelene’s biological mum and her partner in their car, the two teenagers have to confront their feelings for each other, and their aborted trip into stardom.

One knows exactly what writer/director/producer/editor Adams had in mind: a British comedy on the lines of SIGHTSEERS (2012). Here the leading duo was out of cinch with reality and the humour developed because they literally get away with murder. But Benny, Jolene and their helpers are just incompetent, and all their faux-pas’ are hardly funny – just stupid and incompetent. You can’t laugh when the cover of the duo’s CD shows a big tree instead of Benny, or when Joelene’s mum and her argumentative friend fail to put up a tent – it’s something we have seen too often and in much funnier ways. The duo and the rest of the cast act clumsy ‘on purpose’, but since they have only random contact with reality, there is no confrontation and the little comedy there is targets only the clumsiness of the characters. Why give away the ending at the beginning?, so that we cannot expect a single surprise. Everything is miles over the top, but never in a funny way. The camera only excels in the road externals, and the actors stand no chance with the script. An unstructured narrative stumbles from one episode to the next.

Even today the ‘CARRY ON’ comedies have more bite than BENNY & JOLENE, let alone a professional standard, which Adam and his team can only dream of. Even after only eighty minutes one can only feel relief when it’s all over. AS