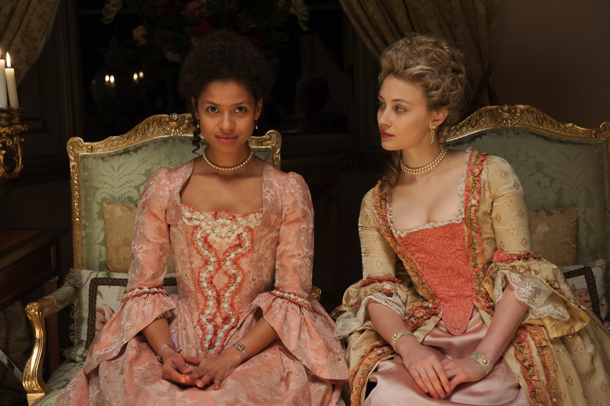 Based loosely on the life of Dido Elisabeth Belle (Gugu Mbatha-Raw), the illegitimate daughter of an English Naval Admiral and a black slave, who grew up in Kenwood, London with her uncle Lord Mansfield (Tom Wilkinson), then the Lord Chief Justice, BELLE has more than its fair share of conflicts and confrontations. Apart from the permanent struggles of the title heroine to adjust as a bi-racial woman in an overwhelming male-dominated racist society (less than one third of the black population in London were free, slavery was only abolished in 1833), her status in the household was ambiguous to say the least. Whilst her relationship with her cousin Elisabeth (Sarah Gadon) is that of personal equality, this stops when the outside world arrives at Kenwood: Belle is closeted away till after dinner when the “informal” part of the evening begins. And when Elisabeth is introduced to London Society to find a suitable husband, Belle is kept away – even though her inheritance from her father will change even that in the end. And, to cap it all, there is a great judicial case to be decided: Lord Mansfield had to rule in the case of the “Zong”, a slavery ship, whose owners wanted compensation from the insurance company for dead slaves who were killed because they were too sick to work, due to lack of water. Meanwhile, Belle has fallen in love with the young vicar’s son John Davinier (Sam Reid), who is a radical opponent of slavery and has fallen out with Lord Mansfield, his ex-employer, over the issue of abolition.

There are so many fine supporting performances, particularly that of Emma Watson as Lady Mansfield, and Miranda Richardson, whose Lady Ashford is so eager that her son Oliver should marry a rich woman, that she is even prepared to overlook Belle’s ethnicity.  Why then is the end product so underwhelming? Well, first there is the formulaic structure of the narrative, which leaves little to the imagination. The solemn deliverance of speeches does not help either – the turbulent political landscape in England in question during the film covers mostly 1778-1793 and deserves vivid images, not mildly heated intellectual duels. And perhaps we have all seen enough of upper-class splendour, the rigidity of their lives and their repressed emotions – the BBC has the monopoly here. BELLE was inspired by a portrait painting of Dido Elisabeth Belle and Lady Elisabeth Murray, most certainly created by Zoffany, portrayer of royalty, in 1779. One can say, that the technical perfection, but also the lack of originality and the beautiful superficiality has found its way into the film. Covering so much turmoil, it still remains a resolutely limp and tepid drama. AS