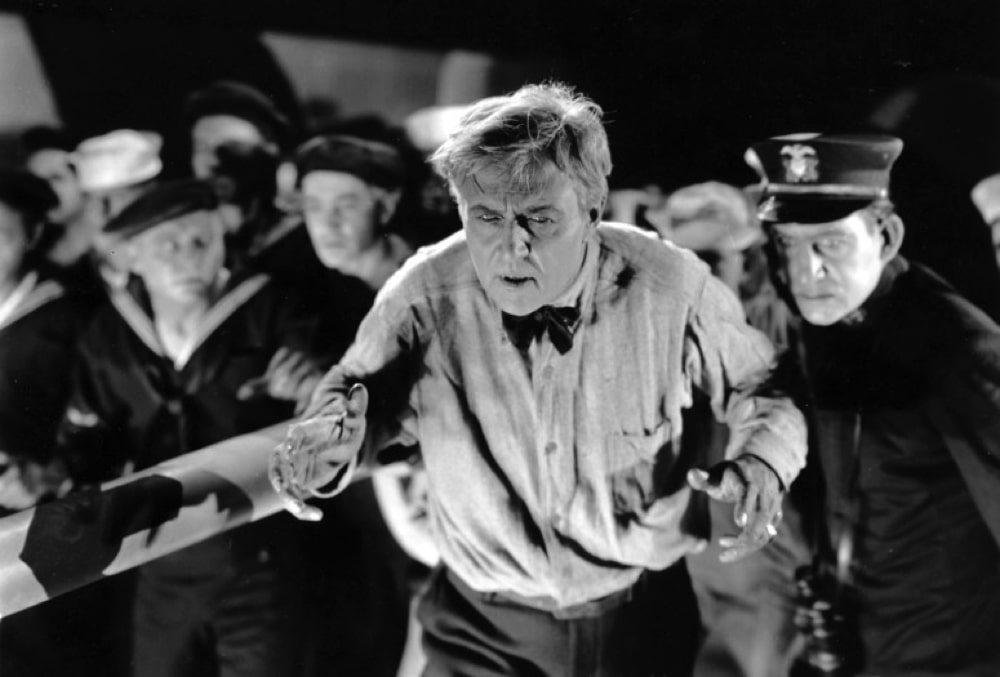 Walter Schwieger, the U-boat commander who on 7 May 1915 ordered the torpedoing of the ‘Lusitania’ could never of dreamt of the bloodlust against his countrymen that his action fuelled in the United States. It certainly kept Wallace Beery in steady employment playing bestial huns as late as Rex Ingram’s The Four Horsemen of the Apocalypse (1921), when he chomps on a chicken leg while instructing a firing squad; and it’s when he makes his first appearance in Behind the Door as a dastardly U-boat commander that this film – which shows hatred of the Hun unabated a full year after Germany’s surrender – comes to life.

It comes as no surprise that Gouverneur Morris’s original 1918 short story was barely two pages long, as most of ‘Behind the Door’ feels simply like preparation for Hobart Bosworth’s vengeance on Beery for what he does to his wife. Bosworth is taxidermist Oscar Krug, who after sampling the hostility welling up in small town America against those like himself of German extraction, shows his patriotism by rolling up his sleeves and commanding a ship to fight the German navy.

It would be interesting to know if submarines in wartime actually did make off with shipwrecked female passengers as spoils of war as Beery does with Bosworth’s wife, but it’s not hard to imagine. Harder to anticipate is the incredible vengeance Bosworth exacts on him when fate bring them together again two months later.

Having already failed to recognise Bosworth as the grimacing face pressed against a porthole as his U-boat dived, Beery is then stupid enough to brag in detail over a cup of coffee about what he did to his wife. The first of two visual shocks that follow is the shot of her being tossed through a doorway to Beery’s sex-starved crew like a bone to a pack of starving Alsations (when they’re through with her she’s then fired out of a torpedo tube); the second is a close-up of Bosworth’s taxidermy tool kit, which Bosworth had conveniently brought along with him. What he does with this kit is not shown, but we’re left in no doubt.

Bela Lugosi did the same to Boris Karloff at the conclusion of The Black Cat (1934) fifteen years later, and in Intolerance (1916) a man has his head lopped off on camera. Doubtless equally gruesome moments exists elsewhere in pre-Code cinema, but in those days such moments were all the more effective for being unexpected; unlike the depressing competition modern filmmakers seem to be constantly engaged in of drawing attention to themselves by outdoing each other in pushing the limits in the depiction of ultra-violence on the big screen. @Richard Chatten