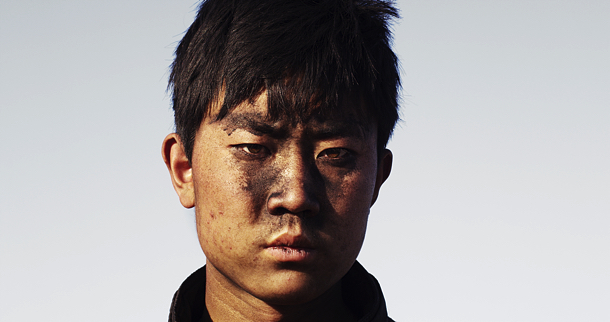 Where once verdant grasslands carpeted Inner Mongolia in a lush natural landscape of green, dehumanisaing machines now occupy the home of herdsman and their families alienating them from their former life with a cacophony of drills and ash mountains in the place of pastureland.

Zhao Liang’s documentary serves as an ode to the past and a meditation on an uncertain future as industry destoys a way of life that was for centuries both spiritually nourishing and profitable for the locals. Behemoth is a visually evocative piece that recounts a descent into hell brought about by the surge in mining activities, offering gruelling employment to both Chinese and migrant workers as is it wounds the scenery in search of coal. The grimly drawn images offer a plaintive paean to the past that is mesmerising, rhythmic – monotonous even. Life before was tough, but this new order sucks the souls from the workers and infects their lungs. Once proudly in control of their destiny now they are cogs in a mindless, meaningless inferno.

Zhao and his French co-writer (and producer) Sylvie Blum liken the process to Dante’s Inferno where gradually the circles of Hell get hotter and darker commensurate with the sins of the souls forced to endure their torment; but these people have commited no sin.

After a day’s work we see them retreat to their shanty homes as grey slags heaps dominate the distance. Caked in soot they scratch around for supper after wiping themselves in grey cloths, having lined the silken pockets of their new masters, the mining companies. One evocative scene shows a naked man curled up in a green field with a slag heap sharply jutting up in the background. And this is a clever motif that runs through the film.

Zhao’s most striking footage turns the screen red with the incandescent fires of the furnaces. This is contrasted with a simple image of a horseback shepherd returning a lost lamb to the fold. Now these people are the lost and forsaken. A haunting and sinister soundtrack accompanies the frightening images; word seem redundant.

Not that there is anything to be gained by this flagrant industrialisation. As we experienced in Stray Dogs (2013) and Black Cole, Thin Ice (2014), the rapid and ill-conceived urbanisation of China and its neighbours is a tragedy that is made more relevant when we witness the dispossession and destruction it has created in its wake. And the final act of Zhao’s important documentary builds to a startling finale. You won’t know whether to laugh or cry. MT

OUT ON GENERAL RELEASE FROM FRIDAY 19 AUGUST 2016