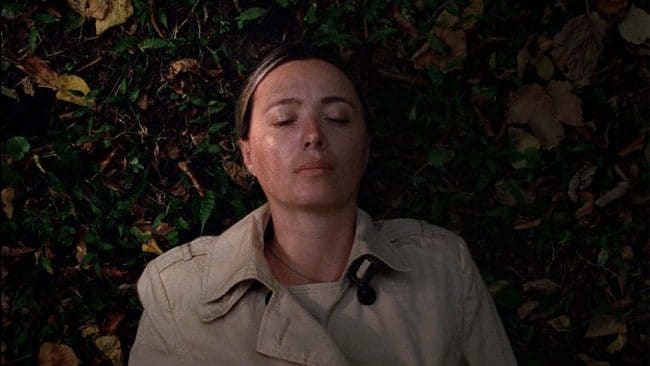 Dea Kulumbegashvili won the top prize at San Sebastian 2020 for her serenely self-assured yet sorrowful portrait of dispossession that ripples out into wider concerns for her native Georgia and the world in general.

Seen through the eyes of a disenchanted woman living in provincial Georgia this debut feature is a sensual and stunningly cinematic exploration of all that is wrong with society from religious intolerance to misogyny and the erosion of rural life pictured in the film’s devastating scorched earth finale.

On the crossroads between Europe and Asia, Georgia is an independent country and of the most ancient Christian nations dating back to the 4th century. The film opens in a small town in the Caucasus Mountains bordering on Azerbaijan where, as the wife of a Jehovah’s Witness leader, Jana (Sukhitashvili) must play a rather subservient role to her husband David (Oneli). This film opens during a chapel service which is firebombed by an explosion, causing the frightened congregation to flee into nearby countryside. The incandescent blaze glows on silently for a while afterwards igniting Yaha’s own inner turmoil that will smoulder through this slow-burn Tarkovskian drama, delicately touching on its thematic concerns in a way that nevertheless speaks volumes for the audience.

Light plays a vital role in Beginning. Playing out as a series of vivid tableaux vivants, the jewel-like frames are often glow with a viridescent pool of light, Arseni Khachaturan’s fixed camera scrutinises the main character in each frame who is often bathed in a shaft of light, or closely observed while the speaking character is out of sight. One sublime take sees Yana lying in a bed of autumn leaves, the ambient bird song slowly dying out as she is transformed into a bliss-like state. Captivating for some viewers (it lasts for around 7 minutes), it may however test other’s powers of endurance. What Dea achieves here is a meditative intimacy with her character. And as we are drawn more closely into Yana’s orbit, we feel a deep affinity with her state of mind; the affect is quite astonishing and deeply calming.

Yana emerges tolerant and forbearing, inspiring our sympathy despite her inner discontent; she is never angry or histrionic even when the children she is preparing for their first religious communion collapse in a fit of giggles. She exudes an almost saint-like endurance except when talking to her self-absorbed husband who professes his deep neediness of her despite his inattentiveness. Shutting down her feelings of futility, he responds patronisingly during a conversation early on in the film: “Let’s find you a job”. Yet as she toils away in the kitchen, Sukhitashvili’s Yana is a luminously compelling heroine, resembling a latter day Jeanne Dielman, a woman who carries on calmly amidst gruelling domestic trivia, a loving mother bewildered by the lurid sexual abuse meted out on her by a visiting police detective come to investigate the chapel fire.

There is one scene where David and Yana appear to be on the same page in their tender pillow talk although David’s chief concern is rebuilding the chapel so his career path is not derailed despite his wife’s calmly-voiced inertia, her own work as an actor having been on the back-burner since their son’s birth.

The film’s painterly views of nature evoke Dea’s appreciation of her homeland and concerns for a rural existence threatened by the future. In a scene towards the end of the film a uniformed hunter looks menacingly into the camera possibly hinting at Georgia’s ongoing tricky relationship with Russia. One more puzzling scene contrasts a violent rape attack (Yana and the detective?) with the wild beauty of its rocky riverside setting where two figures tussle violently at the extreme right of the frame where they are almost indistinguishable from the flow-strewn purple and white undergrowth.

A visit to her mother reinforces Yana’s feelings of subjugation and disempowerment as a woman. Recalling her own difficult marriage, her mother warns Yana not to mention the incident for fear of rocking the boat. Yana is clearly alone in the world with two males who depend on her but never consider her own emotional well-being.

Finally, on a drive home one night David discusses their future in small-town Georgia. A move to Tbilisi is on the cards but David sees it from his own perspective as the camera looks out onto a dark and rainy road ahead. Yana remains locked in silence, a receptacle for everyone’s needs but her own. MT