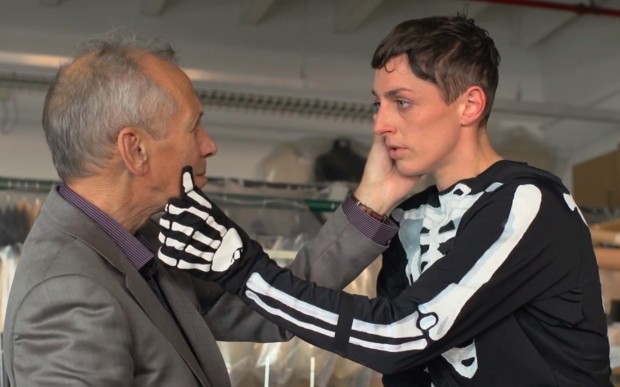 Death is seldom interesting as a theme in and of itself, and so a whole film dedicated to confronting it is bound to come with limitations. Such is the case with Jorge Léon’s ostensibly daring and intermittently emotive documentary BEFORE WE GO, whose world-premiere at FIDMarseille this year brought a sombre air to the festival’s international competition.

Death is performative: it waits not in the wings but between the rows—a space in which Schoue lies, in the opening moments, dressed in a skeleton suit as the opera house’s opulent crystal chandelier is lowered for an official show we never get to see. Later, she encounters one of the older protagonists, embarking upon a playful game of cat and mouse, of director and directed. Later, Lachambre assists another terminally ill senior in assembling a colourful patchwork of filters against a window, which the old man later observes through a viewfinder. Stuart, meanwhile, interacts with an older woman, hugging her “super tight” in a hold bordering on a sexuality that transcends bodily and intergenerational limits. “Enjoy my joy,” the woman remarks.

Léon goes out of his way early on to foreground his older protagonists’ physicality, framing them in candidly unflattering nakedness as duodenal tubes emanate from their torsos. Mortality is his default sobering reminder, as when he shock-cuts from that aforementioned moment of kaleidoscopic, sensorily wonderful view of colours to the reality of a bed-bound, one-legged, one-eyed figure whose chest protrudes outward and whose stomach sinks like a deflated, lifeless balloon.

Elsewhere, Léon’s younger performers execute solo routines. Lachambre feigns an epileptic seizure as if to a violently contorting spirit attempting to leave his body. Stuart gives a convulsive, vein-popping manifestation of a kind of physical glossolalia, one whose twisting intensity encapsulates her comparatively youthful muscularity opposite the terminally ill woman she encounters. “Between dreams and reality, it was like a fusion,” says Lachambre, referring to the vivid dreams caused by his daily medication. Later, Schoue swaps clothes with her partner—who, after he’s donned her skeleton outfit, leads her outside for a dance on the balcony.

And so it goes. As one brief sequence showing music software on a laptop suggests, the greater joys of Léon’s film were to be found in the process of making it—that is, for those involved in its production. These three intertwined encounters, between movement and immobility as well as other more obvious binary opposites, were no doubt sources of euphoria for all participants. Like death as a nebulous abstract, though, touchy-feely therapies such as those portrayed here come with limits—which, for a film all about bodily boundaries, may be the point. MICHAEL PATTISON

FID MARSEILLE RUNS FROM THE 1-7 JULY 2014 IN MARSEILLE, FRANCE. follow the link for the full coverage