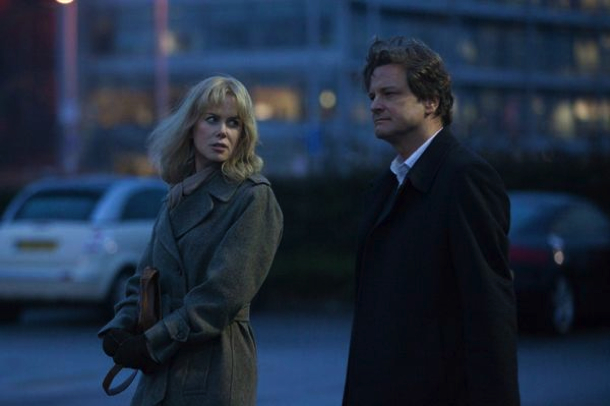 Before I Go To Sleep is the glum screen adaptation of a best-seller penned by hospital worker turned writer, S J Watson. Set in a deeply gloomy winter in the English home counties, it re-unites Colin Firth and Nicole Kidman – last seen miserable together as a married couple in the extremely average drama The Railway Man.

Nicole plays Christine, an amnesia victim, who wakes up each morning having forgotten her identity and, indeed, who she married 13 years ago. Her condition is due to a bump on the head (atypical psychogenic amnesia) and her loving and supportive husband Ben (Firth) has to leave notes on the ‘fridge and remind her where she keeps her underwear and other personal effects. It emerges that a brutal attack caused Christine’s memory lapses and she visits neurosurgeon Dr Nasch (Mark Strong) who advises her to record the daily events on a camera, these events are seen in flashback in this fractured narrative.

Christine discovers that her close friend Claire (Anne-Marie Duff) has moved abroad after the accident but can’t think why they are no longer in contact. Gradually, she also finds out that her dear husband is not the sensitive companion that he appears to be.  Dr Nasch is also rather a creep: we all know from past experience that Mark Strong usually plays the bad guy, so does a leopard ever change his spots? Difficult to say, without giving the game away. Infact, it’s difficult to review this film without revealing a few clues on the storyline.  Suffice to say that this is the sort of story that relies heavily on female paranoia and Nicole Kidman is an inspired casting in the role of Christine. Her delicate features and subtlety are superb here (remember her in Birth and The Others?) but it’s Colin Firth who really excels in morphing from the warm and tender lover to a troubled and vicious bully. However, Roland Joffe’s choice of a heavy soundtrack to ramp up tension is a weak device and so it’s entirely left to cinematographer Ben Davis to create the creepy atmosphere and generate sufficient terror in the final stages of this chilling British thriller. You have been warned. MT