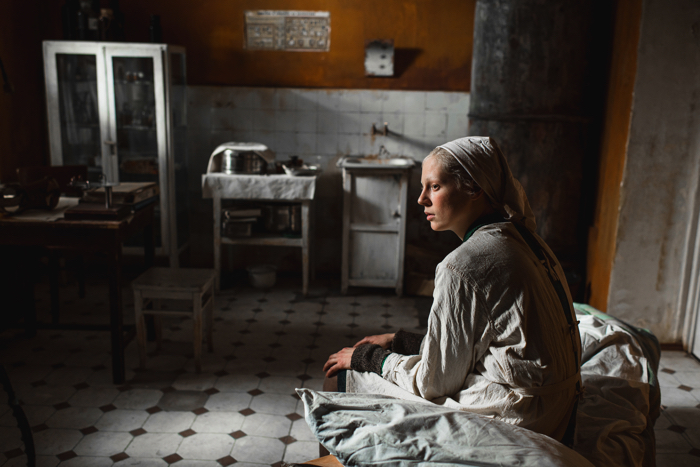 A bitter bond of revenge and inter-dependence keeps two Russian women viscerally entwined in Leningrad after the Second World War comes to a close.

Beanpole is Kantemir Balagov’s follow up to his kidnap thriller Closeness which took the FIPRESCI prize in Un Certain Regard two years ago. Based on a story from The Unwomanly Face of War by Nobel laureate Svetlana Alexeievich, it sees the two women brought to their knees physically and mentally after the war has devastated their city. But life goes on for Iya, a tall rangy blond known as Beanpole (Miroshnichenko), and her friend Masha (Perelygina) who served together on the front, Iya returning early due to a neurological condition, bringing back with her Masha’s little son Pashka (Glazkov) in the autumn of 1945.

This gruelling slow-burner is softened by its gorgeously vibrant aesthetic that lends a jewel-like radiance to the girls’ misery, captured in Kseniya Sereda’s brilliant camerawork. Masha is wilful, mercurial and playfully charismatic – Perelygina is simply mesmerising to watch as she plots her way forward, emotions floating across her face like clouds on a winter’s day – Beanpole is a sullen and introverted soul but the two have no one left in the world but each other, and a terrible tragedy that threatens to destroy or deepen their fraught friendship. This close friendship contrasts with the sheer scale of the horror they have experienced on the front. Confined to stuffy interiors and hospital wards   the enormity of their emotional pain and suffering swells to bursting point. In the late Autumn of 1945 Iya is a nurse in a local hospital and her neurological affects hermivement. But Pashka is her pride and joy and their closeness is deeply moving.

By the time Masha returns from the front, a dreadful event has taken place. Balagov explores the shifting dynamic between these two women with impressive maturity for a filmmaker still in his twenties, particularly with this female centric story, men taking a backseat – the world-weary head doctor Nikolai Ivanovich (Andrei Bykov) and Masha’s irritating suitor Sasha (Igor Shirokov) who is the son of a Communist party official. Somehow Sasha’s mother and the doctor get drawn into the complex web of need, revenge, and power.

Leningrad is almost romantic in its postwar atmosphere and Sergei Ivanov’s set design adds a homely folkloric touch to the interiors. Memorable scenes are those outside Sasha’s family dacha, and Masha’s tram ride in the final moments of this striking, intense and emotionally resonant drama. MT