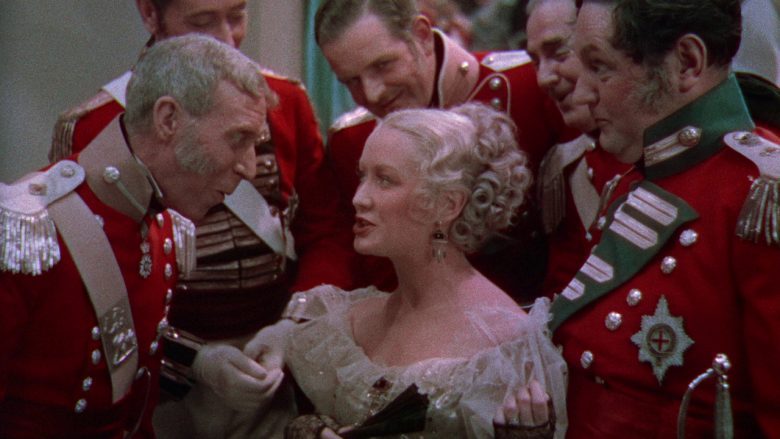 The first feature film shot entirely in the newly perfected Technicolor process, Becky Sharp – which had cost an estimated $950,000 – was dismissed at the time by Otis Ferguson as “As pleasing to the eye as a fresh fruit sundae, but not much more”. Unlike The Jazz Singer – which had blazed an equivalent technological trail eight years earlier – Becky Sharp was not a box office hit, and colour was to take another thirty years to become the cinema’s default setting the way sound did; more associated with historical rather than contemporary subjects.
Becky Sharp was in fact the third film version to be made of Thackeray’s sprawling 1847-48 novel (which had originally appeared in serial form) set against the backdrop of the Napoleonic wars. This version was based upon the hit 1899 Broadway dramatisation by Langdon Mitchell, and as meticulously designed by acclaimed theatre designer Robert Edmond Jones. The rigours of early Technicolor filmmaking resulted in an extremely stagy and studio-bound experience which whizzes in just 84 minutes through an originally very long and convoluted narrative under the punishingly hot lights that made early Technicolor films such a trial to act in. (Mira Nair’s 2004 remake with Reece Witherspoon, by comparison, clocks in at 141 minutes!)The men at whom Miss Sharp sets her cap are all inclined to be pompous middle-aged caricatures (with the honourable exception of Alan Mowbray as Rawdon Crawley), since she is after financial security rather than romance. Opinion continues to remain divided over Miriam Hopkins in the title role, whose stature as an actress has dimmed considerably since she received an Oscar nomination for this film; but she does bring sparkling blue eyes to the part, seldom apparent in her other movies. Although the most eye-catching moments involve red British army uniforms, much of the rest of the film actually employs blue (a hue hitherto absent from the Technicolor palette) to attractive effect. The credits, for example, are in blue, and the first shot of the film itself is of a blue stage curtain being pushed aside.

For over forty years the film languished in the public domain in a cheap 67 minute 16mm Cinecolor travesty until finally restored in 1984. It subsequently received only one British TV screening ten years later; but now be enjoyed on BluRay as the “triumph for colour” Graham Greene declared it on its first appearance. Richard Chatten