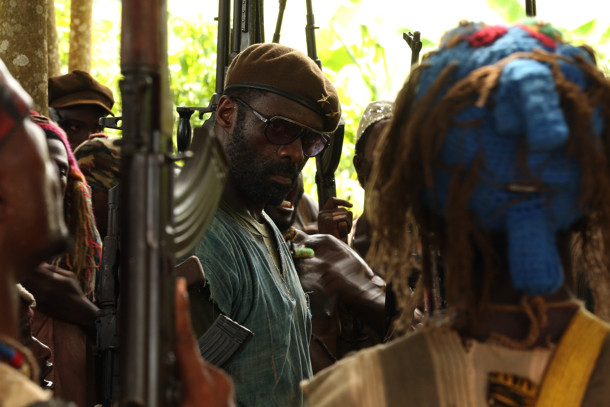 Based on the experiences of Agu, a child soldier fighting in the civil war of an unnamed African country.

Cary Fukunaga who has directed such diverse productions as Jane Eyre (2011) and True Detective (2014) turns his hand here to another literary work with this screen version of Uzodimna Iweala’s novel of the same name.

Set in a unspecified country in East Africa, it tells the harrowing story of young Agu (Attah) who is caught up in the harrowing civil war which ravages his country that not only destroys his childhood but traumatises him for life. We meet him first as a fun-loving boy who plays pranks on everybody particularly his older brother. Once a teacher, Agu’s father, now helps the Nigerian peacekeeping force acting as a buffer between the two warring fractions. Agu’s life seems complete, but one day, government forces overrun the village, killing Agu’s whole family apart from his mother who manages to escape to the capital. When soldiers kill his best friend, he wanders into the woods before being picked up by an army of rebels commanded by an pompous and violent warlord (Elba). In love with violence, the sadistic killler soon teaches Agu to kill and sexually abuses him whilst pretending to protect him as a surrogate father.

Shooting mostly outside in Ghana, Fukunaga paints an unredeeming picture of the inhumanity in this compelling and convincingly dramatised war movie that witnesses the corrupting of a young boy. This is not a war between ideological forces, but simply a fight between two gangster armies, fought without rules and killing the neutral population of the country in far greater number than the enemies. But after the victory of the rebel army, the same leaders become statesmen over night, doing away with their brutal elements like the colonel. Meanwhile, Agu phantasises about his mother again in the capital, before becoming violent on his ow accord. His voice-over tells us that he has lost faith in God, and that he will never play kids games again. Questioned by a young woman working for the UN, he feels like an old man, talking to a young girl.

Idris Elba gives a dynamite performance full of layered subtlety and charisma and Abraham Attah is simply astonishing as the boy. Fukunaga spares no gruesome details and Agu’s journey through hell is told without sentimentality from an observer’s point of view.The images of war and destruction are so realistic that occasionally one has to look away. Running at over two hours the length and a forced happy-end are the only elements that detract from this otherwise harrowing tour-de-force. AS