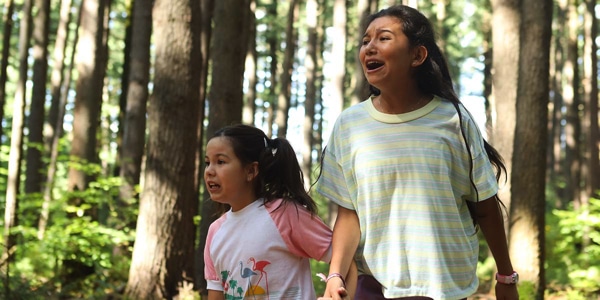 This feature film debut of Canadian director/co-writer Tracey Deer is both a coming-of-age story and an autobiographical take on the Oka crisis of July 1990. Then a conflict broke out between the Mohawk and the city of Oka, Quebec in Canada, the latter wanting to enlarge a golf course, which would have infringed on holy burial sides of the native Canadians. After 78 days of blockades and strife between Mohawks and the Canadian Army, supported by local police and a ‘White Power’ mob local police, the dispute was settled with the loss of only one life. This was the first of many conflicts between indigenous groups and authorities in Canada.

We meet the titular Beans, brilliant debutant Tarbell when she is still the “good” girl, going for an interview at the posh Queens Height High School. Mother Lilly (Dickerson) is pregnant and over-protective. When the conflict breaks out everything changes for the twelve-year old and she gravitates towards the slightly older and certainly tougher neighbouring children April (Alexis) and Hank (Woon). They have a lot of freedom at home because their father is permanently drunk. When Beans’ father (Joel Montgrand) and his friends decide the women and children should be evacuated Lily, Beans and little sister Ruby (Beauvais) are pelted by rocks, the latter ending up covered in shattered glass. Having finally reached the hotel, Beans goes to a party with April and her friends where she kisses Hank as a ‘dare’ in the closet. Later she has a fight with another girl, trying to show how tough she is to April and Hank. Lily, exhausted and close to giving birth, takes all four children back home, but they are again attacked by white residents. Whilst her mother is giving birth to a baby boy, Beans has a sordid encounter with Hank who wants a blow job – a term Beans had never heard off. This sets up a rather predictable finale.

Archive films show a white mob, not very different from the current Trump supporters. There is sheer hatred in their eyes. In the feature, the scenes at the shop are particularly disturbing because the white women, having shopped a life time with their Mohawk friends, suddenly turn nasty, and shove them violently out of the shop premises.

DoP Marie Davignon’s images are impressive, particularly the Mohawk convoy of women and children being pelted by rocks by screaming white men show a frightening intensity. Whilst the ensemble acting is admirable, director Deer is let down by a rather formulaic narrative, which leans very towards mainstream features. Nevertheless, one does now look at the “clean” image propagates by Canadians with a different eye – racism does not stop at the longest international border between states.