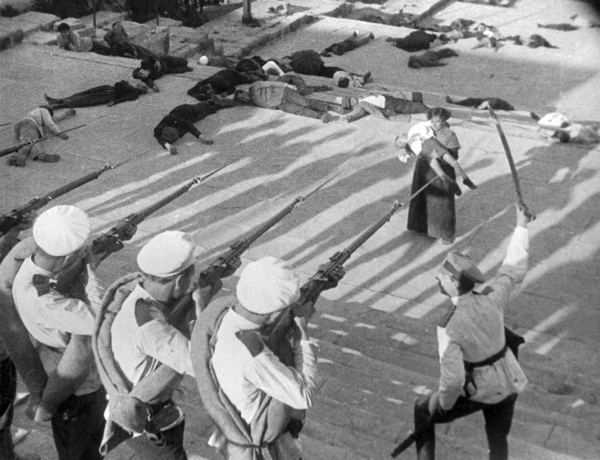 EISENSTEIN ON THE STEPS  Alan Price shares some thoughts on Sergei Eisenstein’s 1925 epic that sees the crew of a Russian battleship mutiny against the brutal, tyrannical regime of the vessel’s officers, resulting in a street massacre with police when the ship finally docked in Odessa in 1905.

There are three problematic shots of lion statues in Battleship Potemkin (1925) that disturb some critics when they discuss the use of montage in film. And they profoundly offended V.F.Perkins in his landmark book Film as Film. He didn’t proceed to attack Potemkin’s most famous montage moment, the Odessa Steps sequence. No, it was the lions, as symbols of authority, inserted arbitrarily into the general narrative of Potemkin, which he thought to be wilfully self-imposed. Though if you consider Potemkin as a great example of revolutionary propaganda then can you denounce Czarism’s lions the right to be assertively present and thus exposed as another enemy of the people?

Victor Perkins considers the lions to be a “momentary flaw” that “adventurous filmmakers are bound to explore.” Does that mean directors will become over-iconoclastic and throw in any image to make a dubious point? Yet his argument is more with critics “I would wish the limits of my attack on montage to be clear. I claim only that there is no special merit attached to the use of editing devices as such, and nothing more cinematic or creative about these usages than about achievements in the significant use of lighting, dialogue, décor, gesture or any other of the film-maker’s resources.” 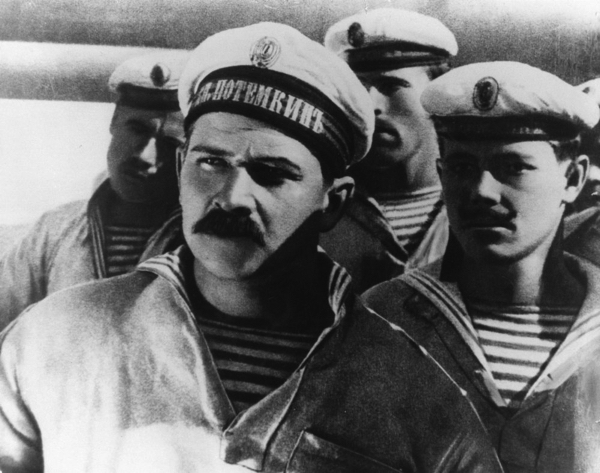 The expressiveness of a fully functioning mise en scene requires what’s listed. And the outcome of such cinematic density can be synthesised into the long take – the logical antithesis to rapid cutting. As Andre Bazin said of the films of Stroheim, “One can well imagine in theory, a Stroheim film composed of a single shot which would be as long and as close-up as one liked” I can easily conjure up shots from Stroheim’s often raw and pitiless Greed (1924) that create the illusion of holding your attention longer than their actual screen time. But they are never un-cinematic or boring.

The mise en scene of Eisenstein’s Potemkin is often a fidgety motion holding back or anticipating the rapid editing of the film’s climaxes. Thousands of words have been written on the construction of the Odessa steps sequence but they cannot really paraphrase its dynamic (though director Roger Corman made a fine attempt now viewable on YouTube.) Film students can theorise about the meaning of the editing but as an ordinary viewer you really have to bodily feel that you and its victims are helplessly falling down and down. Even today we are forced to emphasise with the fate of that baby in the pram, just prior to it bumping down the many steps. It makes you want to reach out a hand and save the innocent. The firing soldiers move, like a stark Italian Futurist machine, over the running and falling bodies forcing you to imagine peoples screams and the cracking of heads and ribs. Those seven and a half minutes of violent repression still exert an artistic and visceral power that shames other cinematic crushes (or more precisely bloodbaths) like the formulaic violence often found in Tarantino and De Palma’s self-conscious Odessa imitation, The Untouchables: but at least managing to constructively inspire the massacres in Sam Peckinpah’s The Wild Bunch or the violent mayhem of The Godfather 2.

Potemkin is a film in five parts. (1) Men and Maggots – The sailors protest at having to eat rancid meat. The doctor, peering through his pince-nez, examines a carcass and tells the sailors that it’s not worms but only maggots that can be easily washed off with brine (In the BFI Blu Ray restoration they have never looked so sharp and repugnant.) (2) Drama at the Harbour – the sailors’ mutiny and their leader Vakulynchuk is killed along with some officers and a priest (played by Eisenstein, suddenly laughing and yielding his cross after feigning death.) As the mutiny is enacted Eisenstein’s masterly eye for group composition is apparent– though I do have sympathy with those of his Russian contemporaries who accused Eisenstein of being a mere formalist- for this grouping and re-grouping of men can’t escape from sometimes being manipulative and self-conscious – not exactly a slow game of chess more rapid checkers. (3) A Dead Man calls for Justice, the body of Vakulynchuk is mourned over by the inhabitants of Odessa (The composition of the shots we view from inside the covering, over Vakulynchuk, as mourners approach him, has a superb lyric strength.)  (4) The Odessa Staircase – the Tsarist soldiers kill and trample everyone with the cold logic of a programmed Terminator. Heightened realism it might be but a realism that shifts its killing machine into fantasy, even SF. (5) The Rendezvous with a Squadron. We assume the navy is about to attack Potemkin, but end up joining forces with the rebellious sailors (wonderful images of sailing boats and warships here but less wonderful is the relentless pounding rhythm of Eisenstein’s editing accompanied by Edmund Meisel’s apt, if bombastic score, that rapidly becomes hectoring.)

Parts 1 – 4 climaxing on Odessa are mostly thrilling. But after the magnificent steps magic Potemkin has nowhere to go. Of course anything afterwards was bound to be an anti-climax. But the film can’t end here – there must be an epilogue. Yet Part 5 begins to bludgeon you with its revolutionary fervour. If only it had been shorter and not built up over-inexorably to its triumphant conclusion. Sergei, the state required a communist message, but it should (could have?) have been trimmed and then I might have forgiven you that shot of a hoisted up, red-tinted flag.

The violence of Odessa lives on as great cinema amidst Potemkin’s other episodes where ‘masterly’ filmmaking can appear strained. Odessa will always command our compassion and horror even though that sequence is heavily aestheticized An aesthetic call to revolution can work powerfully in political cinema (see The Battle of Algiers) yet at Potemkin’s climax it naively feels like a command to rejoice in victory, or else comrade!

Stark Eisenstein violence preceded Potemkin in his savage first feature, the consistently brilliant Strike. Eisenstein moved on, with his mathematical film concepts, and realised, for me, his greatest compositional achievement (and most satisfyingly film) in Ivan the Terrible Part 1.  Whilst an even more richly sensual and liberated imagery is to be found in the stunning fragments that remain of his uncompleted Que Viva Mexico (with the gay shots of Potemkin sailors in hammocks anticipating the Mexican peasantry in their hammocks too). Mexico and the tyrant Ivan appeared long after the explosion of Potemkin – produced when Eisenstein was twenty seven: youthful genius indeed that we’ll continue to celebrate along with the other films I’ve admired, his theoretical writings, a vast amount of drawings (sometimes erotic) and generally marvellous artwork. ALAN PRICE

BATTLESHIP POTEMKIN is now on blu-ray at the BFI