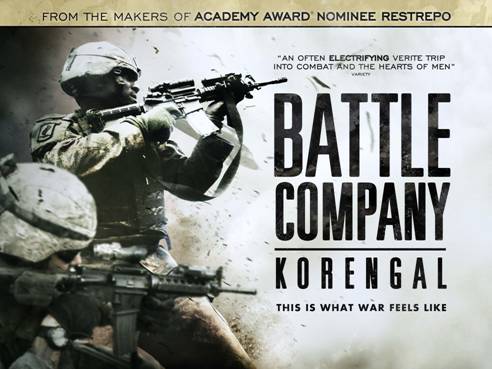 This is part two of a documentary showing the soldiers of the Second Platoon of Battle Company fighting in Korengal valley in the Nuristan province in north-east Afghanistan. After Restrepo (2010), director Sebastian Junger sets out to show coverage of their fortified retreat up in the mountains, shooting proud with their high-tech weapons, on the Taliban down in the valley. They go and visit the village elders during daytime, very much aware of the fact, that the same men will entertain the Taliban at night. Apart from the bitter fighting, we see the men trying to come to terms with their mission – hoping against hope “that we can bring the villagers into the 21st Century. When we go home, we have done something good”.

They mourn their fallen comrades, amongst whom are Juan Restrepo, a medic who emigrated from Columbia to the USA. They feel bound to scarify themselves for their fellow soldiers even though they admit to feeling desperately needed by their families and unprepared for just how much adjustment they will need back  home. Only one of the men is honest enough to confess, that it was his decision to fight this war, “people at home will say ‘you did what you had to do’. But it is not true, I chose to fight here”. The overall impression is that these are grown-up boy-scouts with suicidal tendencies; not adults who made an informed choice about their profession.

The allied war against the Taliban in Afghanistan has created a new sub-genre of war film: the fascination with the wild-romantic setting and the brutal fighting has produced a slew of cinema-verite documentaries; brilliant on details and spectacular to watch – but never asking the most important question: if this was an un-winnable war from the beginning, why are we still fighting? Because the soldiers are well aware, that when they leave for home, the Taliban will take over, and the corrupt government in Kabul, made up of Warlords, who fought the Taliban in a civil war costing over a million civilian lives, will have not much control outside the cities. And whilst the Taliban are repulsive fundamentalist, they at least stopped the production of opium when they were in power. Little is to choose between the two sides violently hell bent either to make profits from Opium, or keeping the population, particular women, in the middle-ages. And what chance for the naïve (to put it mildly) teenagers from Oregon, Kansas or California to make any sense out of this situation, their only chance to survive is to follow the orders of their senior commanders, and relay on each other. Yes, they love their weapons, but with the fervour of boys they really are.

Because of its overall aesthetic brilliance and daring photography, KORENGAL, like most films of this genre in the last 20 years, feels like an awful piece of voyeurism. AS