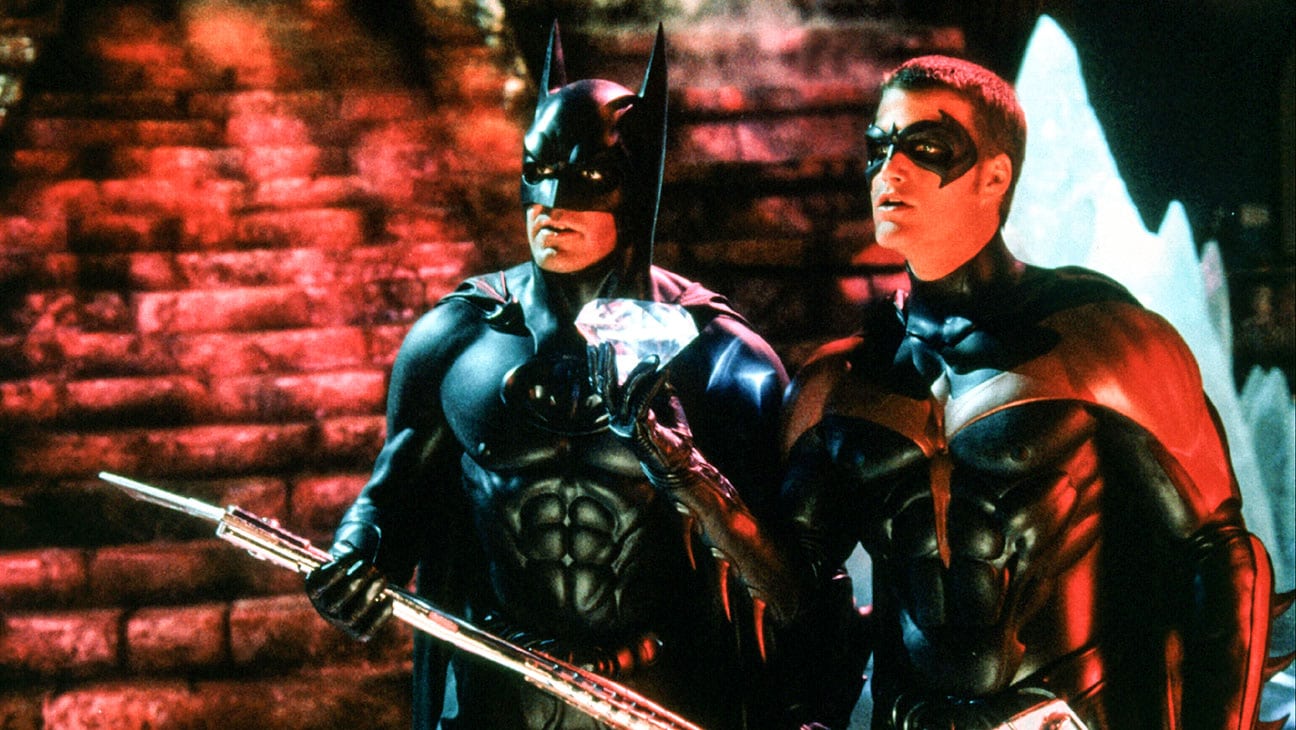 Interestingly enough the venerable Leonard Maltin gave Batman & Robin a higher rating (two and a half stars) in his Movie Guide than Batman Returns (two stars), which over the years has probably caused plenty of outrage in some quarters; but with which I happily concur. As a fan of the TV series I never thought Tim Burton’s Batman movies were that great to begin with – and anyone who says Batman & Robin is the worst movie ever made should be forced to watch Catwoman – so I’d like to say a few words in support of this deliriously Big Dumb Movie.

Yeah, I know, the Tim Burton and Christopher Nolan movies are “DARK”!! Big Deal…! They certainly take themselves very seriously; but this isn’t exactly Eugene O’Neill we’re talking about. Sure, Joel Schumacher couldn’t make a decent movie if his life depended upon it; but at least the money is all up there on the screen (it certainly looks as if it cost the $125 million Warner Bros. squandered on it). It contains a touching swansong from Michael Gough’s Alfred (who’s late sister Peg in an old photograph is actually Gloria Stuart, who played Old Rose in the same year’s Titanic), has a cool score by Elliot Goldenthal and swish special effects; and it’s refreshing to see a recent Hollywood movie that actually looks as if it was shot in Technicolor rather than just various shades of brown and beige.

And it has Uma Thurman as Poison Ivy. Along with Jim Carrey’s Riddler, Thurman’s Poison Ivy is one of the two best villains in the entire eighties & nineties franchise: every bit the supple, purring jezebel that Michelle Pfeiffer’s whining crybaby of a Catwoman should have been but wasn’t. Elliot Goldenthal’s smooth saxophone theme further heightens her sinuous impact, while her sleek green one-piece (happily without nipples) actually improves upon all the previous versions; making her the only female character since Lee Meriwether’s Catwoman to wear a costume slinkier and sexier on the big screen than she did in the comic strip.

There are just two snags; and in keeping with the gargantuan nature of this epic folly they’re big ones. The first – Schwarzenegger being the bigger star – is that Poison Ivy gets only a fraction of the screen time devoted to his boring Mr Freeze. The other snag – surprise surprise – is Schumacher again.

Schumacher was openly gay and liked the rest of us to know all about it. But whereas gay directors like Pedro Almodóvar and François Ozon regularly populate their films with strong and glamorous women, in Batman & Robin we instead get nipples and codpieces adorning the Dynamic Duo in tandem with a lack of interest on the director’s part in Thurman’s thrilling little minx that amounts to negligence. (Schumacher shoots enormous close-ups of the Bat-Trio’s butts as they get dressed for action but repeatedly passes up opportunities to show us Poison Ivy from behind. Note the way that she sweeps in to meet Schwarzenegger in one scene with the camera tracking along behind her as she walks the length of the room photographed full-length from behind AND SHE’S WEARING A FUR COAT DOWN TO HER ANKLES; which she promptly casts off, never to wear it again! And later she places her boot on the bottom rung of a ladder and on the very frame that she starts to turn away from the camera to begin climbing SCHUMACHER CUTS!!)

But enough survives from the detritus to make this a far better way to waste a couple of hours than other overproduced dreck like Armageddon or Pearl Harbor. @RichardChatten