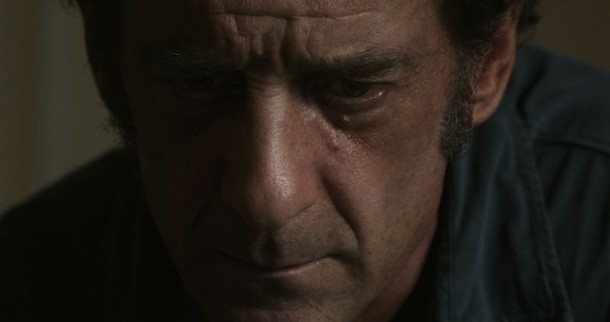 Bastards is a much darker re-working of Claire Denis’s 2008 family drama 35 Shots of Rum. It stars Vincent Lindon as Marco, captain of an oil tanker, who abandons ship and returns to Paris to help his sister Julie (Bataille) after her husband Jacques  commits suicide. Meanwhile, their daughter Justine (Creton) is roaming the streets of Paris naked, high on drugs and alcohol. Marco moves into an apartment building where he meets Raphaelle (Mastroianni), who just happens to be the ex-mistress of Edouard Laporte, a business tycoon who has lent Julie and Jacques huge sums of money. Laporte still visits Raphaelle, who lives with their son, Joseph. Soon Marco and Raphaelle become lovers, Marco is at first unaware of the connections between his sister and the tycoon – let alone the reasons for Justine’s depraved life style.

The neo-noir element of the film is underlined by Agnes Godard’s photography working with digital for the first time: shadows intrude even in the daylight hours, and the night scenes are truly claustrophobic. Even their love-making seems brutal and often sadistic. Marco, who starts the film as an innocent, is soon dragged into the circle of deceit, exploitation and power games. Neglecting his own children, who live with his estranged wife, he soon forgets he came to help his sister, and abandons himself in his pursuit of Raphaelle. When the sad truth of the relationship between Justine, her parents and Laporte dawns on him, Marco becomes vengeful, and when he confronts Laporte violently, he leaves Raphaelle with his revolver, having to make a choice

Few films are so unremittingly negative, even nihilistic. Money is the major motivation; parents neglect their children – or worse – pimp them, evil lurks at every corner behind a bourgeois set-up. Paris comes off as a cold and hostile place, a dystopia bereft of moral values, the female characters Raphaelle, Julie and Justine, submitting to the desires of men. AS

BASTARDS IN now on BFI subscription from 22 August 2022