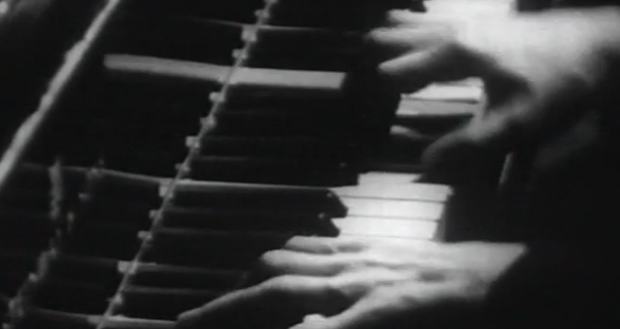 Ken Russell’s first feature film French Dressing (a re-make of a Roger Vadim And God Created Woman) in 1964 was a critical and financial disaster. So back he went to the BBC’s Monitor/Omnibus, a long-running Arts magazine series, that would spawn a host of black and white musical biopics including a triumphant study of Elgar (1962) and an innovative look at the Hungarian composer. Bela Bartok (1881-1945). When Russell returned to feature films in 1967 with the Len Deighton adaption of A Billion Dollar Brain, the result was, sadly, similar to his 1964 outing. But you could never accuse him of being banal.

There are many parallels between Bartok and Elgar, mainly their love of the countryside, which is reflected in their music. But Bartok (like his music) was a much less straightforward character than the rather robust Victorian Elgar: he was downbeat, full of angst and loss, suffering an eventual exile, which robbed him of his beloved Hungarian countryside.

We start with a reflexion on The Miraculous Mandarin, influenced by Stravinsky and Schoenberg. But there are also undertones of Debussy, who was one of his great admirers. Russell’s narrative is darkly erotic – the ballet features a girl who is led by men to seduce clients making love to them until death. Then there is a young sex worker (Boty) whose engagement with a client (Eles), is interrupted by her pimps. They rob him, let him escape, but again catch up with him, beating him up again. The rather violent sex (and misogyny) united Bartok and the Russell of his later films. The same goes for the one act Opera Bluebird’s Castle, where we follow Bluebird (Brett) and his latest wife Judith (Watkins). She does not want any secrets between them and pays with her life, when the last chamber is opened she gets a good glimpse of the bodies of his previous wives.

Huw Wheldon was much more than just the narrator of Bartok – he had been made Controller of BBC One. As such he wielded enormous power, and (again) refused any re-construction (docu-drama) of real events. Bartok begins with the composer (Ranevsky) as an old man, according to Wheldon’s commentary, in poor health and fighting his demons. But overall “Bartok struggled all his life to maintain his privacy, he was an alien in an alien world”. This condition found its way into his music, a theme Russell graphically conveys into images: Music for Strings, Percussion and Celesta is underlined by Bartok’s near paranoid loneliness. Showing his isolation, claustrophobia, later repeated on a crowded escalator: a permanent descent into the nadir.

Bartok’s fragility is understandable, given the state of Hungary: after growing nationalism the First World War brought Hungary independence from the hated House of Habsburg; but what followed was the chaos of the Räte Republic and immediately afterwards the semi-fascist rule by Admiral Horthy. The latter lasted until the end of WWII, and Bartok forbade his work to be performed in Germany and Italy, even though he needed the royalties. He did well to escape to the USA with his second wife in 1940. Wheldon describes his music for Divertimento for String Orchestra from 1939 as a “statement of grief.” Later Bartok wrote in one his letters: “What an elemental disease home sickness is, how overwhelming. What a strict law lies here, not likely to be disturbed. Hungary had never meant more to anybody.”

Bartok had always fought the Germanic influence in Hungary’s cultural life. He, like Elgar, fled the big city and ventured out into the countryside. “Whenever possible, he got away into the plains and villages of Hungary, living with the peasants and sharing their life. He conducted a systematic investigation of the whole peasant music tradition of Hungary.”

Another emigrant, Russian writer Vladimir Nabokov put it like this: “I discovered in nature the non-egalitarian delights that I thought in art. Both were forms of magic, both were a game of intricate enchantment and deception.” But there was a lot of darkness in Bartok and his music, and this nocturnal quality is reflected in the vivid images. Quoting Wheldon again we learn “that nocturnal themes, famous now as Bartok’s Night Music, turn up quite explicitly, again and again, over the the whole of his output.” This goes particularly for Bartok’s final composition Concerto for Orchestra. A mourning song text, that he had collected in 1913 seems perfectly related to the music: “Oh you black and woeful earth!/Who ever gets inside you/Nevermore comes back gain/Many people have you swallowed/Yet you haven’t had your fill.” Written by a man, who found life in New York (in spite of a teaching post at Columbia) a brutal experience.

Russell and DoP Charles Parnall navigate their way though loss, grief and anguish, bringing out the fate of Bartok in poetic sequences, using his music to underline the complexity of his compositions. The overall tone is always reflects the thematic darkness: the destruction of total war. Like the last words in Bluebird’s Castle: “Henceforth, there shall be darkness, darkness, darkness.”  AS