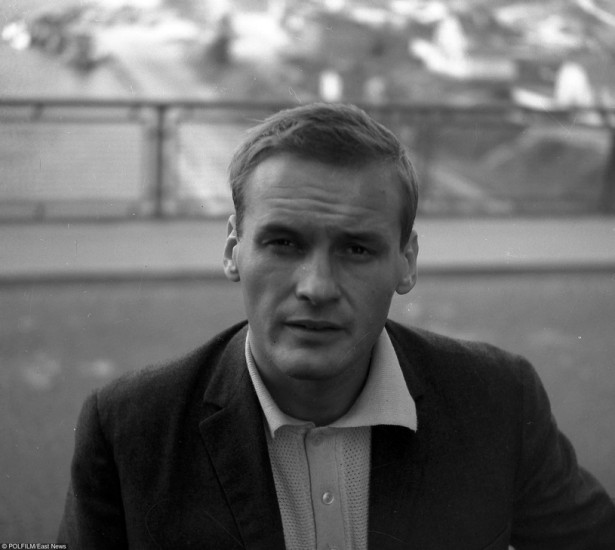 After finishing BARRIER in 1966, Skolimowski left Poland to shoot the German co-production The Departure with Jean-Pierre Leaud. He returned to his homeland in 1967 to finish his Andrzej Leszezyce trilogy (that started with Identifying Marks and Walkover) with Hands Up, banned shortly after the director locked the final edit. Skolimowski returned to Poland in 1981 and showed Hands Up with a new prologue of 25 minutes. On the surface, the hero of BARRIER seems to have much in common with Andrzej but the comedy drama is aesthetically very different; the dream scenes here are very much reminiscent of early Buñuel – without being as cruel as the Spaniard.

The opening shot is symbolic: we see a half-naked male figure leaning forward on a table, trying to get to a matchbox about 80 cm below him. The man in question tries to gobble up the matchbox with his mouth, then has to get back into his original position, without falling flat on his face. What seems like a scene from a South American torture film, is a student’s prank: The future doctors are trying to find a winner for the petty cash they have collected during the year: the first one to be successful in the matchbox endeavour will get the whole stash. The students chanting in Latin makes everything even more sinister.

Skolimowski was not allowed to play the male lead role like he did in Identifying Marks and Walkover. Jan Nowicki replaced him as the medical student, a dreamer who loves jazz and girls – anything but his studies. “I have sold myself to the state for a scholarship”, he exclaims with humorous self-criticism. In his dreams, society appears as an altered state: not totally different from reality, but with a childlike eye for perfect solutions to ordinary questions. But the horror of the first scene returns and while the students in their dormitory stride along the white corridors, we hear terrible screaming. Suspecting the worst, it soon emerges that there is a dental practice next door to the Hall of Residence. When our hero meets a girl (Szczerbic) working as a tram conductor, two worlds collide: she is hyper realistic and sees life as a scheme where progress is made in little steps. But both have one philosophy in common: their contempt for the older generation (rather like in Deep End), stuck in the past – giving the film its title. Again, Jazz and poetry underline the mosaic narrative: “In this cynical and un-idealistic generation romantic impulses manifest themselves”.

But there is no romanticism, however bitter or twisted – the polemic is too fierce and the surrealism is sometimes so absurd if seems as if Skolimowski wants to escape from an unbearable situation. DoP Jan Laskowski (Night Train), creates dark, sinister images of life in a cul-de-sac contrasting sharply with the bland images of everyday life. BARRIER is Skolimowski’s most complex and abstract work so far. AS