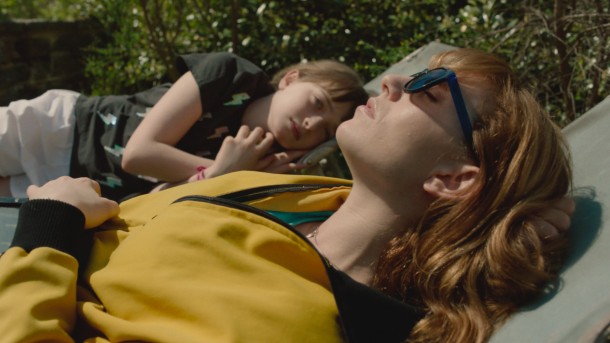 Three women are united in Laura Schroeder’s second feature, which is very much a family affair with Isabelle Huppert and her daughter Lolita Chammah starring in their real life roles, as Elisabeth and Catherine.

Catherine returns home to Luxembourg after a decade in Switzerland during which her daughter Alba been looked after by her own mother Elisabeth. From the side of the tennis court, she watches Elisabeth coach Alba, her face clearly showing how well she remembers this mixture of stimulus and humiliation from her own childhood but Catherine needs to reassert her motherly authority and rightful place in the heirarchy – not easy when Huppert is in charge. The dynamic between the trio constantly changes with Catherine sometimes feeling like a sister to Alba but Schroeder’s skillful narrative is underpinned by some serious undertones which the three manage deftly in their subtle and entertaining performances.

The action takes place over a few days and little is known of Catherine’s past although she has clearly got some serious issues to deal with that have left her unstable and during a day in the country with Alba events come to a head explaining the film’s rather omenous title. And although Huppert is not always present her presence is strongly felt as a dominating force to be reckoned with – perfectly suiting her profile as a powerful actor in often tricky roles.

Laura Schroeder keeps emotional distance from her characters by using the Academy ratio, used after the Silent era when synchronised sound was first introduced in 1929, and this gives this potent character study rather a formal detached feel rather than an intimate ambiance. Despite this BARRAGE offers insight into women’s minds that will resonate with audiences familiar with the territory. MT