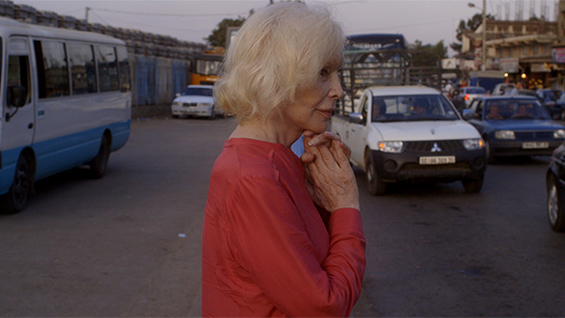 Following his even-footed and effectively straightforward documentary LES INVISIBLES (2012), which concerned a group of middle-aged gay people in France, Sébastien Lifshitz makes mid-lengther BAMBI, an intimate portrait of one of the first French transsexuals. The film scored highly with audiences at the 11th edition of IndieLisboa last week – where it screened as part of the festival’s World Pulse programme.

Marie-Pierre Pruvot was born in a small Algerian village in 1935 as Jean-Pierre Pruvot. From an early age, she hated her given name and insisted to friends and relatives that she be referred to by the name she came to permanently adopt. Speaking of her past with unfussy clarity, Marie-Pierre tells of being an obese child who used to wear her sister’s dresses, and who at an early age began “a long process of construction, or reconstruction, which would last until [she] was 18.”

Marie-Pierre recalls her first love, a lad named Ludo, in whose arms she was found lying one morning by her mother. With this one incident, Marie-Pierre reveals, she changed in her mother’s eyes from being “a paragon of virtue, hard work and intelligence” to being merely “a sordid individual.” Contrary to initial external perceptions, however, Marie-Pierre wasn’t a homosexual boy: she was horrified by the idea of such a label, for it precluded her self-identification as a woman. And so began a two-fold struggle – against homophobia and transphobia.

Edited by Tina Baz, Lifshitz’s film follows a no doubt complex and often traumatic personal history in a defiantly simple manner – for which it is appreciably indebted to its central interviewee. Largely eschewing the sadness and hurt that might otherwise underline a struggle for acceptance in an unforgiving, prohibitive society, BAMBI remains celebratory of Pruvot’s infectiously determined outlook. Which is not to say its protagonist’s life has been free of hurt and sorrow; most moving here are Marie-Pierre’s recollections of when her mother came to visit her in Paris in 1956, realising for the first time how much humiliation and hearsay she had endured back in Algeria due to her daughter’s increasing fame in France.

The film is also evocative of a particular time and place, namely the 1950s Paris where Pruvot was able to join the famous high-end transvestite act La Carrousel de Paris after a successful stint at the renowned Madame Arthur’s. Including archive footage of Pruvot very much ‘at home’ in such a milieu – alongside fellow performers Capucinet and Coccinell – BAMBI provides a valuable chronological snapshot of a sociohistorical layer in which people who identified themselves as women could make unprecedented progress toward gender reassignment procedures. The film takes its title from a popular musical number by Michel Jaubert, which features throughout. Today, as the film itself reveals, Marie-Pierre lives and works as a teacher in Cherbourg. Michael Pattison