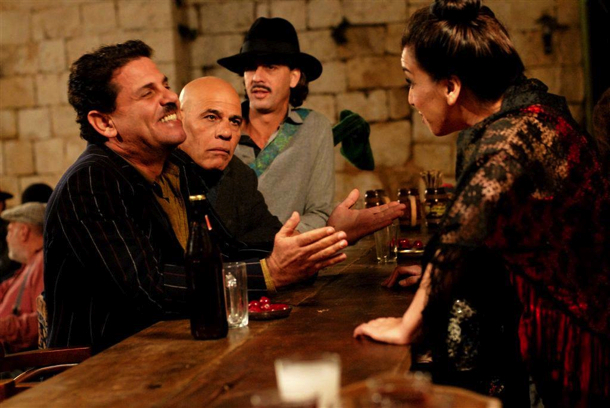 Torati tries to marry two genres: an Israeli form of the Spaghetti Western and a Mizrali Musical cum road road movie, scored by music played by Jews who has emigrated from Arab countries into Israel, sang in Hebrew. The episodic narrative is carried forward by the music, (rather like the recent Broken Circle Breakdown)  and centred around the tar (lute) player Josef Tavila (Uri Gvriel), star of the long defunct “Tourqouise” ensemble. He has spent many years in jail, after he fell asleep at the wheel of the minibus, carrying the group. Two members were killed and his spouse Margaret (mother of his daughter Tamara) has been wheelchair bound since the accident. Since his release from prison, Jossef lives like a hermit, only visiting a pub twice a week to collect his shopping. One day, a young man asks the landlord about Jossef – it is Anram, the son of Avram, one of the surviving members of the famed group. Anram has come to see Josef to ask him to play for his dying father the composition of the title, which has never been performed.

What follows is an odyssey through the countryside, where Josef is collecting all the players of the new ensemble including his daughter Tamara, who, like her father, can drink any amount of alcohol, without showing the slightest effect – something which comes in handy when they free a blind flutist from his exploiters, Tamara drinking their boss under the table. Another musician has to be freed from his soon to be wife (who wields a huge machete) and her violent brothers. Needless to say that all goes well and the new ensemble reaches Avram just in time.

The action part of the film is executed well with many references and quotes to the Italian masters of the Western, humour and irony always helping the unbelievable incidents along. Camera work is impressive, and the actors are careful not to overdo their roles. But everything is dwarfed by the music, sad and melancholic, played on instruments very much unknown in our concert halls. Hybrid the film may be, but after seeing it, many may find that his strange and haunting music has a healing quality.  AS