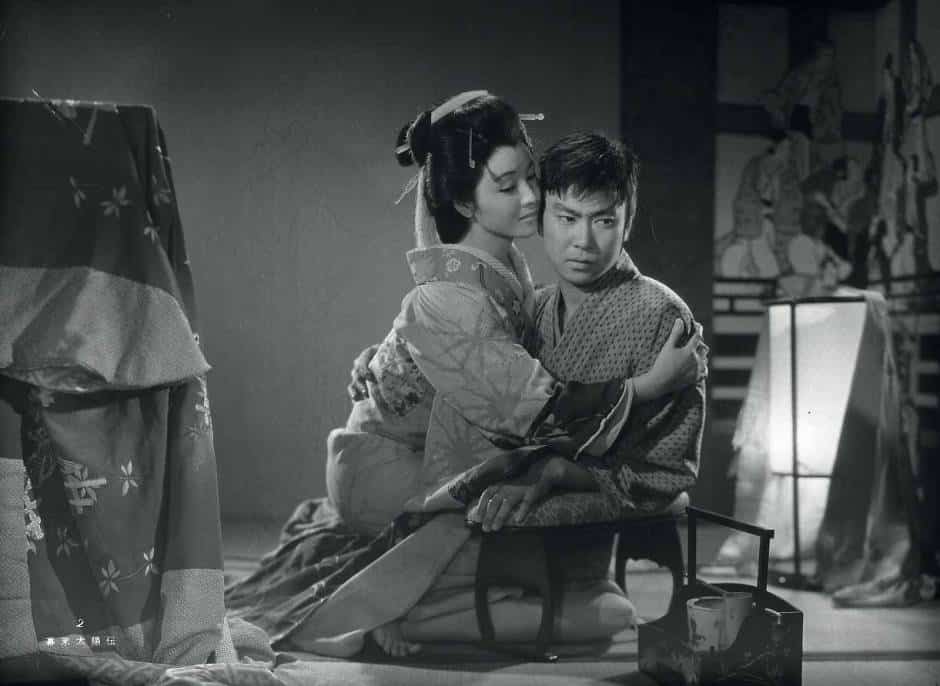 The Sun Legend Of The End Of The Tokugawa Era

A prestigious Blue Ribbon for star comedian Frankie Sakai, a Japanese award set up in 1950 by the critics, little-known internationally, but very highly prized at home. It’s worth remarking that it also won top prizes at two other prestigious Japanese awards, the Kinema Junpo (Sakai-Best Actor) and Best Score for Toshiro Mayazumi at the Mainichi Film Concours.

Black and White, with English subtitles, Bakumatsu Taiyo-Den combines a variety of straight all the way through to broad slapstick comedy, almost in the ‘Carry On’ vein, with genuine drama, so to Western sensibilities it can feel quite uneven in tone. This said, in 1999, it was voted fifth greatest Japanese film of all time in Japan.

Japanese comedy is without doubt an acquired taste, but if you are self-assured in your points of reference within the Japanese milieu, then there is alot to be gained from this complex, layered, confident piece from director, Kawashima.

To offer a little of the homework necessary to frame this film, it is set mainly within the confines of a brothel in the Shinagawa District of Tokyo in 1862, six years before the fall of the (Tokugawa) Shogun Era; Japan lay under quasi-British occupation, to the understandable chagrin of the Japanese people.

At this time, prostitution was still legal and huge districts of brothels servicing the Samurai had existed for centuries. Bakumatsu Taiyo-Den is set at a time just before the fall of the Samurai, when the future of the country was uncertain and a steady living hard to come by, especially those in the service industries.

So, this red light district attracts all sorts; soldiers find themselves rubbing shoulders with superiors, relatives and even sworn enemies whilst hoping to snatch a little RnR from their hectic lives… hence providing the comedy and the drama, as the geisha’s swap rooms as fast as affections in a sometime successful attempt to keep several suitors sweet and thus scrape a living to pay the rent.

Into this cutthroat every-man-for-himself world of greedy landlords, resistance fighters and treacherous affections steps Sakai, ‘the Grifter’, a man who lives entirely on his wits, dancing on quicksand. He understands need and knows there’s a profit to be made in times of upheaval.

For me, it’s a question of taste. I’m happier to watch Ozu, Kurosawa, Koreeda, Kitano, Kobayashi, Mizoguchi… the broader comedy elements here left me unengaged and yet I marvelled at the accomplished depth and breadth of the film, as well as the performances of most of the cast. Without doubt, the inclusion of real drama is one of the reasons it has endured so well with audiences for so long. It refuses to be dismissed simply as a forgettable, nebulous Japanese comedy and the film will without doubt resonate with me for some time to come. If you like your pathos served with bathos, there’s certainly plenty here to enjoy. AT

The Masters of Cinema series on DVD and Blu-ray