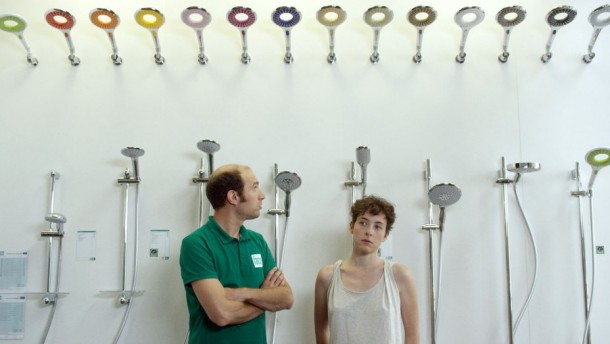 French director Rachel Lang won a Silver Leopard at Locarno for a short film in 2010. Her rather slim feature debut follows the vacuous life of its young Strasbourgeouise heroine who dreams of greater things and richer emotional pastures after going back home to reconnect with past loves and install a shower in her grandmother’s bathroom.

Guaranteed to leave some viewers mildly irritated with its aimless plotline and rather pretentious characters whose ditzy exploits may intrigue others,. there are some laughs to be had in this realist drama with its brief moments of surrealism and sardonic humour.

Ana (Richard) is a film chauffeur who spends the opening scene driving round in circles to deliver the lead actress (Kate Moran) to the set on time and failing miserably. Excused by a sympathetic boss, she then takes the courtesy vehicle, a Porsche Panamera, for an extended spin all the way home where her likeable grandma, Odette (Claude Gensac, On My Way) promptly has a fall, literally bringing BADEN BADEN down to earth with a thud. The freewheeling nature of this arthouse drama gives the impression that Lang is making things up as she goes along or she may just be trying to convey the hit and miss attitude of her central character.

For want of anyone better, Ana gets back with her ex Boris (Olivier Chantreau), who shoots videos, and then is attracted by hunky Gregoire (Lazare Gousseau) who offers his plumbing services for the bathroom project, although it soon emerges that DIY is clearly not his schtick. Later Ana dreams of following Boris through some magical woods – clearly wishing him to be something he is not. BADEN BADEN could be seen as a metaphor for modern life trapped in a grim and directionless urban existence, conjured up by Strasbourg’s stark and featureless architecture, whilst longing for the romantic release and promise inspired by Le Corbusier’s stunning Notre Dame de Haut chapel seen through Fiona Braillon’s impressive camerawork.  MT